Choose Obama over ‘you’re on your own,’ Bill Clinton tells Florida audience 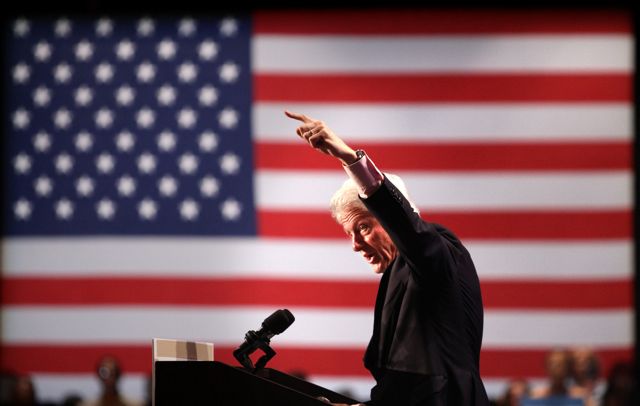 ORLANDO, Fla. — In Bill Clinton’s world, opposing political sides cooperate, arithmetic counts, everyone’s in it together and prosperity is shared by all.

In his world, the choice is between President Barack Obama, who shares his views, and Mitt Romney and a Republican Party platform chosen by a “faction” that seeks constant conflict and trickle-down prosperity, Clinton said in Orlando on Wednesday.

“Get out there and talk to people for shared prosperity over trickle-down, for ‘we’re all in this together’ over ‘you’re on your own,’ for cooperation over conflict and for arithmetic over illusion,” Clinton told more than 2,000 people gathered in the ballroom of the Rosen Plaza Hotel.

The former president followed Democratic congressional candidates Alan Grayson, U.S. Rep. Corrine Brown and Val Demings, as well as U.S. Sen. Bill Nelson’s wife, Grace. They warmed up the crowd with similar calls for economic programs to target the middle and working classes and poor, at least in rhetoric if not in results.

“We have come through every crisis this country has ever faced,” Clinton said. “Our death and destruction and decline has been predicted over and over and over again. So far, everybody who has ever bet against America has been wrong.”

Clinton’s 35-minute speech was similar to the one he gave at the Democratic National Convention last week in Charlotte, N.C., defending Obama’s health care, jobs and Medicare initiatives and assuring people that no president “could have repaired that much damage to the economy” that Obama found when sworn in during January 2009.

Clinton also turned his attention to Florida and Orlando, talking at length about the city’s solar-energy and computer-simulation industries; the jobs-based flexibility and growth of the University of Central Florida; and the diversity of the population. He offered Orlando as “Exhibit A” of his belief in shared prosperity and cooperation.

“Florida is the future, today. You have lots of young people with great diversity and enormous promise, and too much poverty. You have a ton of old folks, just like all of America is going to have when us baby boomers retire. … Then you’ve got these folks in the middle, trying to build an entrepreneurial future,” Clinton said.