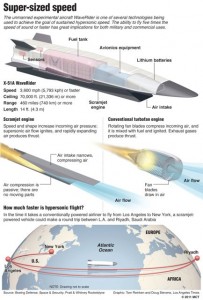 LOS ANGELES — A closely watched test flight of an experimental aircraft designed to travel up to 3,600 mph ended in disappointment when a part failed, causing it to plummet into the Pacific Ocean, the Air Force revealed.

The unmanned X-51A WaveRider was launched Tuesday over the Pacific Ocean from above the Point Mugu Naval Air Test Range in a key test to fine-tune its hypersonic scramjet engine.

The aircraft was designed to hit mach 6, or six times the speed of sound, and fly for five minutes. But that didn’t happen. The engine never even lit.

About 15 seconds into the flight, a fault was identified in one of the WaveRider’s control fins, and the aircraft was not able to maintain control and was lost.

“It is unfortunate that a problem with this subsystem caused a termination before we could light the scramjet engine,” Charlie Brink, program manager for the Air Force Research Laboratory, said in a statement. “All our data showed we had created the right conditions for engine ignition and we were very hopeful to meet our test objectives.”

This is the third time a WaveRider has flown. Not one flight has gone the distance.

Engineers thought they were on the right track with the WaveRider program in May 2010 when the high-speed aircraft made its first flight. In that test, the WaveRider sped westward for about 143 seconds at 3,500 mph before plunging into the ocean, as planned.

But in another WaveRider flight in June 2011, a lapse in airflow to the jet engine caused a premature shutdown.

In the test that took place Tuesday, a B-52 took off from Edwards Air Force Base and flew to 50,000 feet near Point Mugu. Once there, the B-52 dropped the aircraft and it fell like a bomb for about four seconds before its booster rocket engine ignited and propelled the aircraft.

It was then supposed to separate from the rocket and speed across the sky, powered by the air-breathing hypersonic engine, but the control fin issue caused it to fail.

The Air Force said that “program officials will now begin the process of working through a rigorous evaluation to determine the exact cause of all factors at play.”

The WaveRider program is estimated to cost $140 million, according to GlobalSecurity.org, a website for military policy research. One of the four WaveRider aircraft remains. But officials have not decided when, or if, that vehicle will fly.

Aerospace engineers say that harnessing technology capable of sustaining hypersonic speeds — going five times the speed of sound or more — is crucial to the next generation of missiles, military aircraft, spacecraft and even passenger planes.

But engineers have been trying to sustain hypersonic flight since the 1960s, and have turned out few positive results.