EVANSDALE, IOWA –The search for two missing Evansdale, Iowa girls is suspended at this time until further notice, a Facebook event page dedicated to helping find the girls has reported.

The Des Moines Register reported Monday that “Authorities officially called off all mass volunteer search efforts Sunday evening, after more than 1,100 volunteers spent hours scouring the forests, parks, fields and waterways within Evansdale and neighboring communities over the weekend.”

Lyric Cook was reported missing to the Evansdale Police Department (319-232-6682), in Evansdale on July 13, 2012. She has chin-length hair and tanned skin. She has a mole on the back of her neck the size of a dime. She was last seen riding her bike and wearing a light green shirt and shorts. She may be with her cousin Elizabeth. Their bikes were found abandoned near the banks of Meyers Lake.

The event page says: “All civilian volunteer searches are suspended until media releases as of 7*15*12 @5pm according to Kent Smock Evansdale Chief of Police. Confirmed at 8pm 7/15/12.

If you have information you feel would aid the OFFICIALS in finding Lyric and Elizabeth, please contact Evansdale Police at (319)232-6682, Black Hawk County Sherrifs at 319-291-2515, or CALL 911. Your efforts and positive intentions are truly appreciated but should not be posted to this event page.*These girls have been missing since 12:30pm Friday July 13, 2012. The search parties including; helicopters, diving teams, foot searches and door knockers haven’t been able to locate these girls. The search will resume about 8 am meet at Meyers lake, the location they were last seen.

Lyric Morrisey is 10 and Elizabeth Collins is almost 9. Lyric is the daughter of Mysti Cook Morrisey and Dan Morrisey & Elizabeth is the Daughter of Drew Collins and Heather COOK Collins. You may know Drew and Heather from Johnsons Bakery & Planetary Tree Service. Both Families attend Vineyard Churches and are active in the community.

This is completely out of character for either of the girls and time is running out to bring them home safely. At this time, it appears to be an abduction. But there are really no more details. It isn’t believed that the girls are off with a friend and or got lost.”

A person in charge of the  public event page, Laura Benson, wrote: “This is what I know to be true. On Friday July 13 the cousins went to go on a “short bike ride” about noon. By 2 the girls were determined to be missing. The bicycles were found on the south side of the trail near Myers Lake. One girls purse with a cell phone she stored music on which was not activated was found near the area on the other side of the fence closer to the Interstate, over 2 miles from the house. Friends and Family searched the town tirelessly into Saturday. There is no trace of the girls since. It is believed that they were abducted, however there is no tangible evidence supporting that so this case is still considered a “missing persons”. There is NO amber Alert because in order to have an amber Alert you need a description of the perp and or a vehicle, we do not have that. Therefore, this case is considered a RED ALERT, which is the same as an Amber, without a description of a perp.
Where the girls bikes were found, it would be incredibly difficult to get them out of there without any people who frequent the lake or the trails or live on the lake and the trails. However ATV’s are allowed back there and there IS A LARGE section of fence that a car appeared to have driven through this winter still not repaired. You can see it clearly from the Interstate.Search and rescue dogs lost the scent of the girls at the bikes. The River, Lake and surrounding area including corn fields in Elk Run, Gilbertville, and N Waterloo were searched with Horses, ATV’s, boats and on foot by hundreds of volunteers Saturday and Sunday… Sex offenders and anyone in the family and friends of is considered a “person of interest” this DOES NOT MAKE THEM SUSPECTS, even elderly relatives were interrogated by the FBI. In addition to neighborhood children, sex offenders in the area and any other suspicious characters. But still we have not been able to progress since the bikes were located any further towards finding the girls.

There is a sizable and growing reward established for any information leading to the return of the girls and or conviction of their perpetrator. Donations for the Family can be made at First Security Bank 3600 Lafayette Evansdale Iowa 50707. Donations towards the reward fund can be made in person at the Evansdale Police Department. There is an officer assigned strictly to the reward money.

If you have any further Questions, theories or information, please do not post it here, and call the Evansdale Police @ 319*291*2515 or call 911 if you see these girls anywhere or this man who is also a missing person. It has not been said that this man is a suspect, just that he is also missing.” 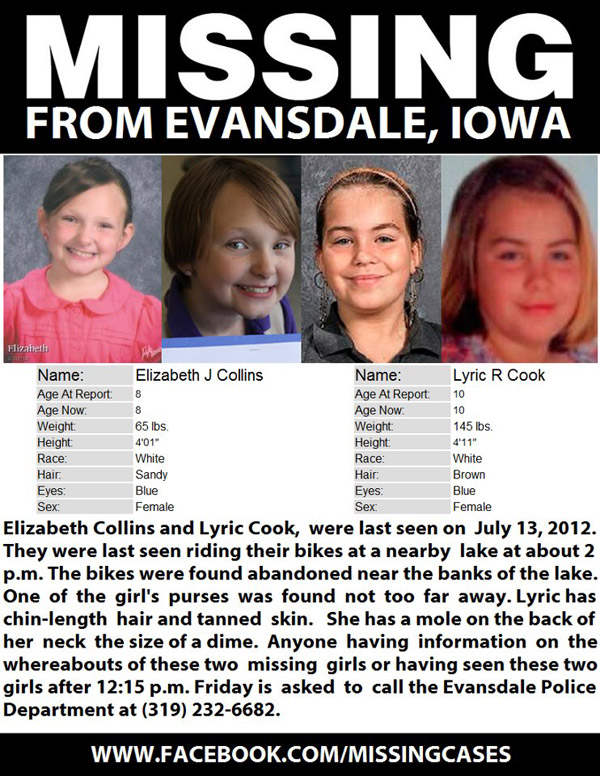