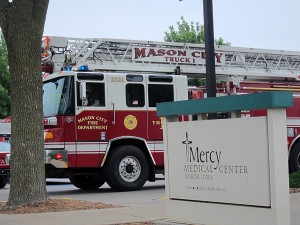 MASON CITY – Mason City Fire Chief Bob Platts was recently asked about calls for service to Mercy Hospital where his department had to respond.

He offered the following information:

“In 2011 we responded to 13 calls at Mercy Hospital East Campus and none to West Campus.  Of those 13, 5 were considered malicious where someone intentionally called in a false alarm or pulled the fire alarm.  Other calls included smoke detector activation which could be from construction or smoke and unintentional transmissions.”

Chief Platts was also asked about the cost for his department to respond to a fire call at Mercy.

“As far as cost there are several ways to consider that from just the fuel used to get there and back or breaking it down by the number of fire calls we have each year and dividing that into our budget.”

Sources tell NIT that a false alarm typically costs taxpayers between $500 and $800 after all the expenses such as wages, fuel, wear on vehicles, etc, are totaled.

Although it is common in other cities of similar size to charge , Mercy Hospital is not charged by the city for false alarm calls.