According to the Charles City Police Department, officers spotted an individual walking down the middle of the road at the 800 block of Clark Street on March 20 at about 11:02 PM.

Police attempted to arrest 21-year-old convicted felon Franklin Foster of Charles City, but he resisted arrest and in the process, injured an officer. He was arrested and taken tot he Floyd County Jail on charges of public intoxication, assault on a peace officer and resisting arrest. 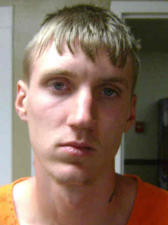