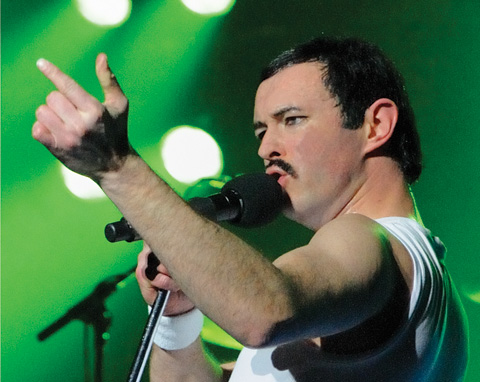 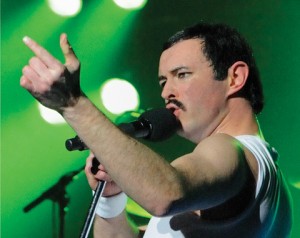 Alliant Energy proudly presents One Night of Queen as they take the stage at the North Iowa Community Auditorium at 7:30 p.m. on Friday, March 9. Tickets are $35 in advance or $40 the day of the show and at the door. This presentation is part of the 2011-2012 Performing Arts and Leadership Series.

One Night of Queen, performed by Gary Mullen & The Works, will bring the energy and music of rock sensation Queen to NIACC. If you are a fan of Queen, you’re in for a treat as the group rocks out to Queen’s biggest hits.

Mullen has been a lifelong fan of Queen. His career as Freddie Mercury started in 2000 when his wife and mother secretly applied to the Granada TV show Stars in Their Eyes. Mullen won the overall Live Grand Final with a record of 864,838 votes, more than double the runner up and setting the all time record for votes on the show.

After the television experience, Gary performed as a solo artist, but immediately started to receive rave reviews and was encouraged by the audience reaction. In 2002 he created One Night of Queen and formed his band The Works. Since then, Gary Mullen & The Works have turned into one of the hardest hitting bands around. For the last five years, they have consistently performed more than 150 shows per year in a variety of countries including the U.S., UK, Germany, Portugal, Holland, France and New Zealand, playing at theatres, arenas and festivals to sell-out crowds. Mullen and One Night of Queen are looking to explore new opportunities in South America, Asia and Australia in the near future. Queen was the first rock band to perform in South America in 1981.

Not only does this riveting rock band sound like queen, but they do their best to look and act as much like the true members of Queen as humanly possible. Gary Mullen sports the well known mustache of the front man Freddie Mercury as well as the tight white pants, some ancient sneakers and often little else.

The axe-man David Brockett plays the strings as well as Gary Mullen sings, sounding so much like the original lead guitarist of Queen, Brian May, that you would swear it was really him. “Davie” Brockett has been compared to great guitar legends like Jimi Hendrix, Eric Clapton and Jimmy Page. Total Guitar Magazine named him, “One of Scotland’s Best Guitarists in 2001.”

Jonathon Evans is known as “Jon” to his band mates, has been poundin’ on the drums since the age of 11. He gives credit to a drummer named Alan Gregory for having the most influence on his musical career. He had been a member in more bands than he could name before he found the right fit with Gary Mullen & The Works. His drum solos are awe inspiring and his energy and enthusiasm is evident during performances. He’s known for such strength behind his drumsticks that on one occasion he broke a drum on stage.

Malcolm Gentles, otherwise known by his band mates as “Rip Van Gentles” and “Mal” began playing the violin at 5, piano at 9 and the drums at age 15. “Mal” went on to study at the acclaimed Chethams School of Music in Manchester when he was just 9 years old. He’s had the pleasure of working with many varied artists and has been involves with musical projects for the BBC, Yorkshire Television and Channel 4. Malcolm has also had the privilege to perform for the Prince of Wales, the Princess Royal and the Duchess of Kent.

Billy Moffat, also known as “B” and “The Q Man” by his fellow band mates, started playing bass at 10 years old and has bloomed into a very popular choice for session work. While Queen went through several bass guitarists before they found John Deacon with the right sound and image they needed, Gary Mullen new Billy Moffat was the right man for the job.

Gary Mullen & The Works will put on an action packed show and interact with the audience to make it a truly memorable occasion. One Night of Queen will rock the house. You’ll think it’s really Freddie Mercury and his original crew.