The parable of John Edwards: Ego can boost too high, too fast 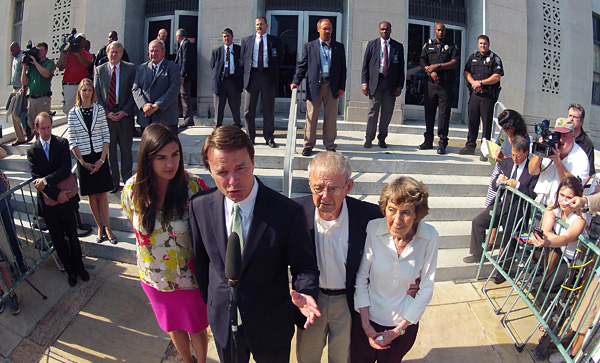 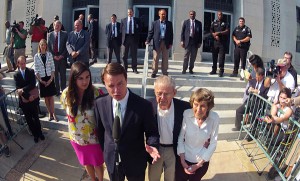 I was having lunch in early 1997 at Big Ed’s restaurant in downtown Raleigh, N.C., with a friend, when he mentioned that Johnny Edwards was thinking about running for the U.S. Senate the next year.

I replied: Who is Johnny Edwards?

(PHOTO: Former Sen. John Edwards speaks to the media in front of the federal courthouse in Greensboro, North Carolina, Thursday, May 31, 2012, with his family at the end of his trial. Edwards was found not guilty on one of six counts in his campaign finance trial and announced it could not agree on the five remaining counts.)

I had been covering North Carolina politics for two decades, but I had never run across Edwards. He was not involved in politics, and as I later learned didn’t even bother to vote half the time.

But I went by his office to meet the boyish-looking lawyer with a pre-$400 Prince Valiant haircut. In the first political story ever written about Edwards, I compared him to the Robert Redford character in the 1972 movie “The Candidate,” a young unknown lawyer who wins but must compromise some of his ideals to do so.

My thoughts returned to my first meeting with Edwards on Thursday as a mistrial was declared in Greensboro after a jury acquitted him on one of six charges against him and deadlocked on the remainder. Regardless of whether federal prosecutors decide to retry the case, don’t think Edwards got off. His reputation — a person’s most valuable asset — is beyond tatters. Surely much of his bank account has been drained by legal bills.

Little did I realize when I first met Edwards in 1997 that I was really looking at rocker Elton John’s “Rocket Man” — you know, “not the man they think I am at home … burning out his fuse up here alone.”

Edwards’ rocket-like political rise was bad for him in every way. Big-time trial lawyers like Edwards are often lone wolves, relying on their own wits to win courtroom battles. Edwards was elected to the Senate in 1998 by spending $6 million of his own money and then riding a national Democratic wave.

He had been in the Senate barely 18 months when he just missed being named Al Gore’s vice-presidential running mate. Soon, he began his own quest for the presidency.

Edwards had smarts and skills, but no seasoning. To use a sports analogy, he was a star pitching prospect with a big arm who was sent from high school right into the big leagues.

In fields known for big egos — trial lawyers and politics — his was super-sized. It wasn’t just political foes — Republicans and doctors particularly — who didn’t like him. Most of the Democratic establishment in Raleigh didn’t care for him either. There may have been jealousy. But they also saw arrogance. And he was seen as a user, never a giver.

Because Edwards was a self-made politician — and because he had not worked his way up the ladder — he didn’t owe anybody. There were no gray heads around Edwards to give him guidance or to keep him out of trouble.

Listen to the court testimony of those who tried to stop Edwards from committing political suicide. The first person was Josh Brumberger, a 27-year-old aide. Imagine that: a 27-year-old junior aide telling a two-time presidential candidate that he needed to ditch his girlfriend if he wanted to get to the White House. Edwards’ reaction was to cuss the kid and fire him.

When more senior aides tried, they were soon gone. They, too, were hired hands, not confidantes.

Perhaps no one could persuade Edwards to leave his ruinous path. He is not the first person to be blinded by a romantic obsession.

But what was truly breathtaking was his chutzpah — that he thought he could pull off such a brazen plot: hiding a mistress and child through an election cycle in the age of social media, the Internet and campaign-opposition research.

Edwards is said to wonder why he has been so vilified when other cheaters, from John F. Kennedy to Bill Clinton, fared better.

But Edwards badly misjudged the temper of the times and failed to see that his circumstances — a dying wife, a child, an ongoing campaign, and an elaborate coverup — made him look like the bigger heel.

Maybe character is fate, and nothing could have dissuaded Edwards from his recklessness. Coming from a small mill town and a family of modest means, Edwards had become a multimillionaire by beating battalions of insurance company lawyers.

No sooner had he arrived in Washington than he took the measure of the men and women around him and decided that he, Johnny Edwards of Robbins, rather than they, should be president of the United States.

The adoring crowds, the packed arenas, the rope lines, the jokes with Jon Stewart, the toadying aides, the Secret Service protection. All that would feed even the most restrained ego.

So what if he had an affair? So what if it had produced a baby? He was Rocket Man.

The normal rules of gravity did not apply to him. Until they did.