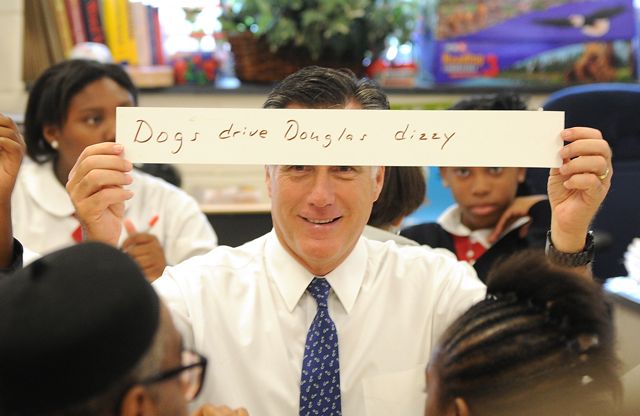 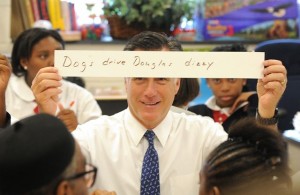 By Miriam Hill, The Philadelphia Inquirer –

Whereupon the teachers in the room immediately questioned his stance.

(PHOTO: Republican presidential hopeful Mitt Romney has a seat in Ms. Stephanie Robinson’s sixth grade language arts class at Universal Bluford ES, a charter school in West Philadelphia, Thursday, May 24, 2012, learning about metaphors, similes and alliterations. Romney holds up an alliteration that he and his desk mates wrote.)

Calling the gap in education performance between black and white students “the civil rights issue of our time,” Romney said quality teaching and parental involvement were the keys to classroom success.

He made his comments during a roundtable discussion in the library at Universal Bluford Charter School, an elementary school named for astronaut Guion Bluford and one of five schools run by a nonprofit founded by music mogul Kenny Gamble.

To a group of a dozen listeners that included Gamble, school administrators and two teachers, Romney recalled how, as governor of Massachusetts, he studied what boosts test scores and what doesn’t. His team analyzed results at schools in 351 cities and towns in his home state and found no correlation between the number of students in a classroom and performance.

“As a matter of fact, the district with the smallest classrooms, Cambridge, had students performing in the bottom 10 percent,” Romney told the Bluford group. “So just getting smaller classrooms didn’t seem to be the key.”

He also cited a study by the McKinsey Global Institute, research arm of the global management consulting company McKinsey & Co., that found teachers’ and parents’ involvement mattered most.

In essence, Romney was differing with one of the givens of modern American elementary and secondary education: that smaller class size produces better results.

That was when two teachers at the table spoke up, albeit in civil tones.

“I heard your position on class size and testing,” music teacher Steven Morris said. “I can’t think of any teacher in the whole time I’ve been teaching, over 10 years, 13 years, who would say …that they would love — that more students would benefit. And I can’t think of a parent who would say, ‘I would like my teacher to be in a room with a lot of kids and only one teacher.’”

Morris then turned to Ronald Benner, who teaches technology at Bluford, and asked if he would want more students in his class.

Another person at the table, David Hardy, chief executive of Boys Latin of Philadelphia Charter School, jumped into the discussion. Hardy, whose school is highly regarded for academics, pointed to a University of Tennessee study that found small class size crucial to pupils’ success, especially in the early grades.

Classes in Philadelphia public schools run as high as 33 students. Universal charter schools try to cap classes at 22 students each.

The setting of Romney’s 90-minute morning visit was striking: he was bringing his Republican campaign into overwhelmingly Democratic territory, staging a media event in a school where students pass through hallways adorned with a portrait of President Barack Obama (along with that of astronaut Bluford, who grew up in West Philadelphia).

Romney’s comments on class size drew mixed reactions from education experts contacted later in the day by The Philadelphia Inquirer.

Jonathan Supovitz, associate professor at the University of Pennsylvania Graduate School of Education, said he was not familiar with the McKinsey work Romney had cited. The Tennessee research, he said, was “very rigorous” and tracked the progress of many students in classes both larger (22 to to 25 pupils) and smaller (13 to 17 pupils.)

“Absolutely the results… showed that the smaller class sizes produced improvement in early learning,” Supovitz said. “And it was particularly effective for minority students.”

But questions remain about whether smaller classes are more cost-effective than spending money on teacher training or other changes, he added.

After the roundtable in the library, Romney went to some classrooms, shook hands with children and sat down for a lesson on literary devices, such as alliteration.

After a few minutes’ work, Romney and a group of children came up with a sentence — “Dogs drive Douglas dizzy” — to illustrate the lesson.

“I think my favorite class was English,” he told the children, adding that it had helped him succeed in business.

He also dropped in on a music class, where second-through-sixth graders sang Kirk Franklin’s “I Smile.” The candidate smiled and chatted but did not clap along.