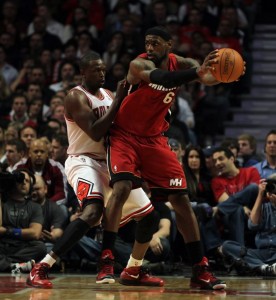 They wound up only with the manufactured type.

Not the quality road win they desperately were seeking.

Despite coach Erik Spoelstra shaking up his rotation, at times dramatically, the result was disappointingly familiar, a 96-86 overtime loss to the Chicago Bulls at the United Center that effectively ended the Heat’s hope for the No. 1 Eastern Conference playoff seed, now three games behind the Bulls in the loss column.

In dropping to 5-6 in their last 11 games overall and 3-8 in their last 11 road games, the Heat were unable to find a way even on a night Bulls guard Derrick Rose experienced the first scoreless first half of his career and closed 1 of 13 from the field in his return from a sprained right ankle; he was held out of the extra period.

It could have ended earlier and more upbeat had the Heat elected to foul while defending a 3-point lead in the closing seconds of regulation. Instead, caught in a wild defensive rotation, the Heat yielded a tying 3-pointer by Bulls backup point guard C.J. Watson with 2.2 seconds left in the fourth quarter.

This one was very Big Three in nature, with James closing with 30 points, Dwyane Wade with 21 and Chris Bosh with 20. But no other Heat player scored more than four points.

For the Bulls, though, with the Big One off the entire night, plenty of Rose’s teammates stepped up in the void, particularly Watson and the power forward tandem of Carlos Boozer and Taj Gibson.

But electing not to foul, and caught in a defensive scramble, the Heat then yielded Watson’s 3-pointer. Wade was short with a leaning jumper at the regulation buzzer.

In overtime, with Rose sitting, Luol Deng staked the Bulls to an 86-84 lead. Wade then saw his attempt blocked by Omer Asik and Gibson converted a 3-point play on the other end for an 89-84 Chicago lead.

Earlier, Spoelstra dramatically shook up his lineup and rotations, first by moving Udonis Haslem into the starting lineup alongside Bosh in place of Ronny Turiaf, then by making a concerted effort to go extended periods with a lineup of James, Wade, Bosh, Haslem and Mike Miller.

The new starting lineup staked the Heat to a 14-6 lead, and when Spoelstra went to the lineup with four starters and Miller, the Heat closed the second period with a 12-0 run to take a 41-36 lead at halftime.

What happened in between, however, was disturbing.

With the Heat up 22-19, Spoelstra opened the second quarter with a lineup of Miller, Turiaf, Shane Battier, Mario Chalmers and Bosh.

With that lineup playing together for the first time this season, the results were disastrous, with the Heat opening the second period 1 for 7 from the field with four turnovers.

Spoelstra explained the switch during his televised interview between the first and second quarters.

“Well, this is something that, you know, we wanted to get to for a while,” he said. “We just haven’t been fully healthy.

“But it’s not about that tonight. We’ve been familiar with each other and we can play with different rotations. But we’ve got to play to our identity which we haven’t done the last two weeks.”

The Heat then had to open the second half with their conventional starting lineup, with Turiaf in place of Haslem, who remained in the locker room due to a stomach virus.

To a degree, both teams’ rotations were shuffled. Clearly not himself, Rose went scoreless on 0-for-5 shooting in the first half, although he did have five assists over the opening two periods. It was the first time in his career he went scoreless in a first half.

With his appearance, Wade tied Alonzo Mourning for most games played in the Heat’s 24 seasons, at 592.

With the Bulls atop the East, Wade went in saying they deserved the immediate respect.

“Yeah, we’re the Eastern Conference champs, and you have to knock down the champs, but at the same time we’re still chasing a team who has gotten better from last year, a team who is the best team in the NBA right now, and we have to chase them.”