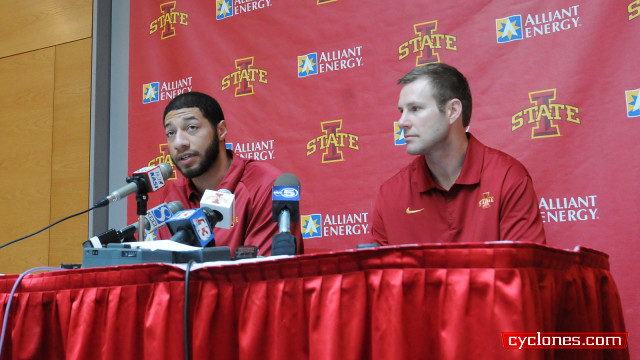 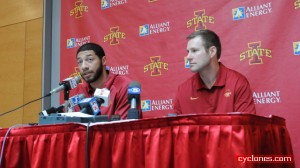 AMES, Iowa – Iowa State point-forward Royce White recorded one of the finest seasons in school history this past year while helping thrust the Cyclone men’s basketball program back into the national spotlight. After consulting with his family and Iowa State head coach Fred Hoiberg, White announced today he will enter his name into the 2012 NBA Draft.

“In conversations I’ve had with NBA personnel, Royce’s unique skill-set and big-time performances vs. elite competition have positioned him to realize his professional dreams,” said Hoiberg. “His ball-skill abilities coupled with his strength and size is a rare combination. Royce is a wonderful person and it was an honor for me to get the chance to coach him.”

White, a sophomore with two years of eligibility remaining, announced his intentions this afternoon at a media conference with Hoiberg by his side at the Jacobson Building.

White signed with an agent this week, therefore relinquishing his future eligibility at Iowa State.

“First of all, I want to thank the entire community of Ames and Iowa State University. There is no way to express how much I appreciate everything this community has done for me,” White said. “Ames has given me my life back, supported me in a way that allowed me to find myself, to improve myself as a man even more so than an athlete.”

“Coach Hoiberg is one of the greatest men I’ve ever met. I’m proud to have shared a piece of his legacy in his town,” White added. “I will always cherish Cyclone fans. They have uplifted me in so many ways, from support on the court, to allowing me to feel comfortable enough to share my problems with anxiety and pursuit of helping those who suffer from mental illness everywhere.”

White’s outstanding play was the lynchpin for the Cyclones’ success on the hardwood in 2011-12, helping lead Iowa State to its first NCAA Tournament appearance in seven years, the third-most conference wins in school history (12-6) and the fourth-most overall wins (23) in the history of the program.

The All-Big 12 First Team selection started to see his name appear on many NBA mock draft boards throughout the season, but his stock rose dramatically after averaging 19.0 points and 11.0 rebounds in NCAA Championship games vs. national powers Connecticut and Kentucky. He also shot 71.4 from the field (15-21 FG) in the two NCAA Tournament games.

The Cyclone star recorded 15 points and 13 rebounds in a 77-64 victory over defending national champion Connecticut, doing most of his damage vs. Andre Drummond, who is listed as the sixth-best prospect on ESPN’s Chad Ford’s top-100 NBA hopefuls. He then followed that performance with a 23-point, 9-rebound showing against top-ranked Kentucky, holding his own against the Wildcats’ Anthony Davis and Michael Kidd-Gilchrist. Davis is projected as the No. 1 pick in the majority of the 2012 mock drafts. Kidd-Gilchrist is also a potential top-10 pick in this year’s draft.

White, who was named the Big 12’s Newcomer of the Year and earned all-district recognition from both the USBWA and NABC, assessed his potential with Hoiberg, who played 10 seasons in the NBA and spent five seasons in front office positions in the NBA. Both White and Hoiberg felt now is the time to make the jump into professional basketball.

“Iowa State is a special place and there will always be a special place in my heart for this university and my experiences here,” White said. “I will always remember beating the Jayhawks and making our way back to the NCAA Tournament for the first time in seven years. Lastly, I want to thank my teammates, without them none of our success would have been possible. They’re some of the best young men I’ve ever been around. I love each and every one of them. The same is true for our brilliant coaching staff and hardworking graduate assistants and managers. Thank you Cyclone Nation!”

Other exploits White produced during his lone Cyclone season was the fourth triple-double in Iowa State history vs. Texas A&M (10 points, 18 rebounds, 10 assists) and the highest rebounding total (316) by a Cyclone since Dean Uthoff (378) in 1978.

The 2012 NBA Draft is scheduled to be held on June 28 at the Prudential Center in Newark, N.J.