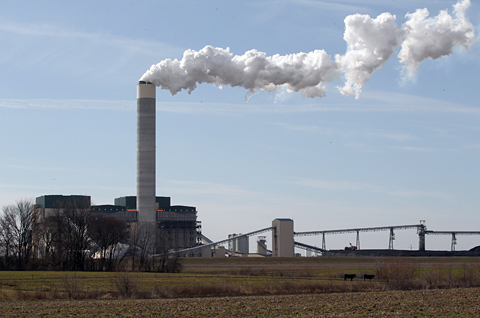 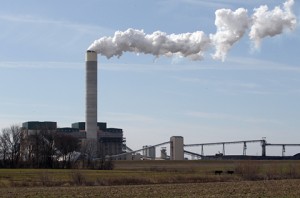 WASHINGTON — The Prairie State power plant, set amid farm fields and woods in southwestern Illinois, will start producing power soon, beginning a life of burning local coal that’s expected to last until at least the 2040s.

(PHOTO: Illinois’ Prairie State plant is almost ready to start producing electricity, beginning a life of burning coal that’s expected to last until at least the 2040s. The largest coal-fired power plant built in the U.S. in the last 30 years, it begins producing power at a time when economic factors are making power companies look to natural gas.)

Prairie State is the largest coal-fired power plant built in the United States in the last 30 years. The company’s website says it represents “a new roadmap for coal.” It will produce commercial power at a time when the shale gas boom is making the nation’s power companies look to natural gas instead of coal for most new plants.

In fact, Prairie State might seem to be the exception concerning coal, which appears to be increasingly on the defensive. On Wednesday, two power companies announced that 10 aging plants will be phased out in Illinois, Ohio and Pennsylvania. The companies said it wasn’t economical to upgrade them with newly required pollution controls. The Sierra Club said those closures brought to 100 the number of announced retirements of coal-fired power plants since January 2010.

“More power plants fall victim to administration’s war on coal,” was the headline on a news release from the Republican-controlled House Energy and Commerce Committee.

Despite the spate of retirements, however, coal-fired power plants aren’t going away. Congress has no interest in passing climate change legislation that would add costs for coal plants. And analysts of energy economics see a long future for coal.

Prairie State shows why coal remains a choice option for some. What sets Prairie State apart from most other U.S. power plants is that it sits next to its own coal mine. The company figures it has enough coal to run the plant for 30 years, providing electricity for 2.5 million households.

“That’s part of the genius. Our owners already own their fuel,” spokeswoman Ashlie Kuehn said. “We’re not subject to the market volatility of coal, or the transportation costs of bringing that in.”

The Department of Energy sees coal remaining the dominant source of power for electricity generation for decades, even though it predicts that its use will drop from 45 percent of electricity generation in 2010 to 39 percent in 2035. It also predicts a drop in coal consumption through 2015, as more coal plants are retired than new ones come online. After 2015, however, it sees coal-fired generation increasing slowly.

The biggest reason that power companies are shifting away from coal now is the low cost of natural gas, said Frank Graves, a principal at The Brattle Group, a consulting firm. Gas is expected to remain cheap long enough to keep coal-plant profitability from surging for at least three to four years, maybe longer, he said.

“There’s just a whole bunch of advantages to gas that are now quite striking,” Graves said, including low fuel costs, lower construction costs and an easier time meeting environmental regulations. Gas, for example, doesn’t have sulfur and mercury emissions, and it doesn’t leave a waste stream of ash.

Most coal costs stem from plant construction; the fuel itself is a relatively small share of the costs.

“What we’ve seen is that a lot of the risks that the big capital-intensive fossil fuel producers have faced are quite volatile and somewhat unpredictable,” said Dan Bakal, the director of the electric power program at Ceres, a coalition of investors and environmental groups.

“We see efficiency as being very low risk,” he said. “When done properly they can deliver quite a bit of energy savings, and deliver those savings at much less of the cost — around one-third the cost — of new electricity generation.”

Greenpeace and the Sierra Club want coal phased out by 2030.

That won’t happen, Duke Energy spokesman Thomas Williams said, because it would be “impossible to generate power at the least cost.”

One sign that many power companies intend to keep burning coal for decades is that they pay for research by the nonprofit Electric Power Research Institute to make coal more efficient and create technology needed to reduce its pollution.

“There will be a sizable coal fleet for some time to come,” said Revis James, the director of the institute’s Energy Technology Assessment Center. In 10 years, coal probably will generate around 40 percent of American power, compared with 45 percent today, he said.

Two changes after that could lead to additional coal use, James said.

“One is if we do eventually see greenhouse gas regulations. It seems counterintuitive,” he admitted. But in 25 years, the U.S. could be facing a need for stringent controls on both natural gas and coal plants, he said. Power companies would want to get the most emission reductions they could from investments in capturing and storing carbon dioxide emissions, James said. Since coal plants have higher emissions, they’d be the likely choice.

“I think the effects of warming will gradually reach a stage where it will prompt political decisions,” he said. “Just from a scientific standpoint I’d expect that. Purely from an engineering and research standpoint, it’s prudent to plan.”

The Electric Power Research Institute is looking for a way to reduce the high costs of carbon capture and storage.

The other trend that could make coal attractive again would be an increase in natural gas prices, James said.

“There’s definitely some concern out there about being over-invested in gas and being exposed to that volatility in the long term,” he said. “That’s another reason our coal research is well-supported by the power companies. They’re hedging their risk by positioning the technology to be available.”