Another season of ‘Oddities’ set to begin on Science Channel 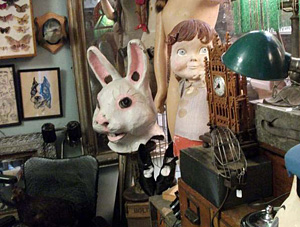 WEST HOLLYWOOD, Calif. — If you’re in the market for a two-headed pig floating in formaldehyde or an antique car once driven by a monkey or perhaps a five-gallon jar of pulled teeth, we have just the place for you. The spot is an antique shop in New York called Obscura.

(PHOTO: Some of the peculiar collectibles as seen on the Science Channel’s “Oddities.”)

But what is even more bizarre is that the shop — and its fairly normal proprietors — are the focus of a reality show, “Oddities,” which begins airing new episodes Jan. 21 on the Science Channel.

People are so inured to the sway of television that they don’t believe that Mike Zohn and Evan Michelson are real folk who earn their living by collecting and selling, well, uh, curiosities.

It all started innocently enough 15 years ago when Zohn and Michelson joined a third dealer in an antique enterprise.

“We all became business partners in the shop,” says Zohn, seated next to Michelson over breakfast in a hotel restaurant on the Sunset Strip. “Then he left and started his own new shop and it was just pure, dumb luck.”

“I was a musician but also a follower of the culture of curiosity,” says Michelson, who is dressed in her customary black dress. “I spent a lot of time on Army bases in Europe and traveled to a lot of the churches and became obsessed with religious relics, human remains under glass. I became obsessed with the churches and old country houses and in my mind, I was to the manor born,” she says.

“I wanted to surround myself with that aesthetic — the gentleman-wanderer, botanist, historian. And that’s an antiques aesthetic so, like Mike, I was going to markets and collecting things and got obsessed with human hair work. That’s my total fetish,” she says, leaning forward and displaying a human-hair locket around her neck.

For Zohn it began with photography. “I started collecting photography, cameras, went to school for photography. In my collecting, I found other things. I went to flea markets, estate sales, antique shows and found other weird things. It sort of grew out of that and just snowballed,” he says.

It’s not a marriage — both are married to other people — but theirs was a business marriage made in heaven. They almost never disagree on pricing items. “Sometimes he’ll go higher if it’s something he particularly loves. But we know the basic value of something,” says Michelson.

“People always assume a man and woman in business they must be husband and wife,” says Zohn, “but it works out. We’ve both been in long-term relationships and marriage for many, many years. I’ve been with my wife for 23 years.”

“On our next anniversary it’ll be 27 years,” adds Michelson.

They still prowl the off-beat sales for the peculiar, the unique, the bizarre. “We average four to six sales a week,” says Zohn. “We go to different ones and try to split the territories, so I get one market and she goes to another one. We’re finding a lot of stuff, it’s still a lot of running around.”

“The hunt doesn’t stop,” muses Michelson, “but the hunt is the fun. You get up very early in the morning in all kinds of horrible weather. Frost is on the ground, you’re in your warm bed. You get up and drive a couple hours into the country, the sun isn’t up yet, flashlight, looking for stuff. There are a lot of crazy people, we’re not the only ones that do this.”

“It’s not easy, this stuff,” says Zohn, 43, who has a 4-year-old son. “It really requires you to go out there and find it. There are nice shops where everything is modern or reproduced or mass-made. We try to avoid that stuff. What makes our stuff so unique and so unusual is that it is quite rare. You’ll not find a second one of these or if you do you’ll have to go to the far reaches of wherever to find the stuff. It has to be authentic, it has to be truly rare. There’s some stuff you can buy online anywhere, that’s not our business.”

“There has to be an aesthetic, everything has to fit in,” says Michelson. “When you walk into the shop it’s kind of like time-travel, like a cabinet of curiosities. You’re enveloped in a different time and place. So anything that breaks that visual momentum — that’s new or mass produced — it’s going to throw the whole thing off.”

The couple has become minor celebrities since the show began. “People come by and are surprised we’re here. ‘Yes, it’s our shop.’ Sometimes people think we’re playing Evan and Mike, but it’s really us.”

“A guy grabbed my arm the other day,” says Michelson, “and said, ‘I’ve never met a reality show star before.’ I said, ‘I’m not a reality show star. I am an antiques dealer who’s on television.’ He said, ‘You mean it’s real?’ It’s very weird to be mistaken for somebody playing yourself, like a Mobius strip reality, it’s very existentially bizarre.”