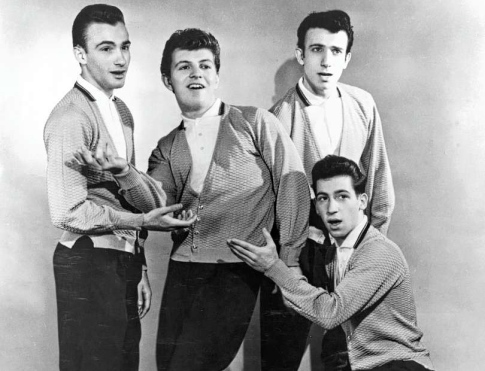 Massapequa, NY – One of the performers who shared the stage with Buddy Holly during the final show of his life in Clear Lake, Iowa is dead.

Doo-wop singer Freddie Milano died Sunday night at the age of 72.  (Pictured first in the photo.)

Milano Rose to fame as a member of Dion and the Belmonts in the late 1950’s.

Milano, Angelo D’Aleo and Carlo Mastrangelo were all friends from the Arthur Avenue area, an Italian neighborhood in the Bronx.

They attended Roosevelt High School and began singing together.

They took their name from Belmont Avenue where Milano grew up.

The group scored a series of hits with songs like “I Wonder Why” and “A Teenager in Live” and continued on as the Belmonts after Dion left to pursue a solo career in 1960.

Milano said he liked performing all of the Belmonts songs, but added that he thought “Where or When” was the group’s best recording.

He said he and his friends grew-up listening to Frank Sinatra and Tony Bennett. “That was like natural to us, we learned that sort of stuff before there was rock ‘n roll.”

During a 2010 interview at his home in the Long Island area, Milano recalled the events surrounding the Winter Dance Tour of 1959 which featured the Belmonts, Holly, Richardson, Valens and Frankie Sardo.

Milano and Mastrangelo provided backing vocals to Dion without the assistance of D’Aleo because he had been drafted into the U.S. Navy.

While Milano recalls the tour was great for music, jokes and card games, the troupe was plagued by touring buses that broke down and had very little heat as they criss-crossed the upper Midwest in the later part of January and early February.

“It was cold that we had never experienced, as far as we’re concerned we’re at the South Pole.”

Milano remembered that Holly and others chartered a plane more than once to avoid a long overnight bus ride.

Hours after their performance at the Surf Ballroom on February 2, Holly, J.P. (The Big Bopper) Richardson and Ritchie Valens would board a small plane with Roger Peterson at the controls bound for Fargo, North Dakota.

The 4 were found with the mangled wreckage of the Beechcraft Bonanza about 5 miles North of the Mason City Airport after the fog cleared the next morning.

Milano remembered that the bus carrying the rest of the performers did not arrive to their hotel in Moorhead, Minnesota until early that afternoon.

The tour manager was the first to break the news to them.

“It was a shock, it was disbelief, like wait a second what are you talking about. So we all ran into the hotel like we gotta go check this out, kind of like we gotta get someone else to say that before we believe it. And sure enough, we went in there they had this little TV, the news was on it was blaring “rock ‘n roll singers get killed.”

Milano encouraged everyone to call home and tell their families they were safe and he said it was a good move because when they called, the people they talked to had heard everyone on the tour had gotten killed.

He remembered Valens as a sweet 17-year old who always called his mother when he arrived at hotel on the tour.

“He told us he was telling her he was gonna be safe in spanish, he would say wait ma, I just want you to hear and then he would get one of us, tell my mother everything’s okay and good.”

Milano recalled they assured her they were taking care of him and making sure he put his coat on because it was cold.

After the crash Milano felt “terrible” about what happened and still did more than 50-years later.

After much discussion among themselves, they decided that the show must and would go on that night in Moorhead as a tribute to the lost performers.

In his later years Milano earned a college degree and served as a legal coordinator for the City of New York.

The current line-up made their final appearance at the Surf during the Winter Dance Party event in 2008.

Milano said he enjoyed the reaction the group received performing their songs. “You finish one and then you sing the next one and the audience starts clapping as they remember it, it’s wonderful.”

Mastrangelo was surprised to learn of his former band mates’ death.

The men had talked by phone the week before and Mastrangelo recalled that Milano had been a heavy smoker at one time.

Milano (pictured in 2011 in Clear Lake, Iowa) had reportedly been diagnosed with lung cancer only weeks before his death.

Milano is survived by his wife lynn, 2 children and 10 grandchildren.

A special tribute message to Milano on the Belmonts’ web site ends with these words: “It was a privilege to share the stage of life with him. We will always love and remember him and carry on his legacy.”