NRA’s message at convention: The fight is not over

This news story was published on May 3, 2013.
Advertise on NIT • Subscribe to NIT

HOUSTON, May 2 (UPI) — The National Rifle Association’s annual convention in Houston is designed to be a conference about issues and not a victory celebration, its spokesman said.

“The NRA doesn’t do pep rallies,” said Andrew Arulanandam. “We’re engaged in a long battle that will take years. We know it’s not over.”

The three-day convention, which begins Friday, comes shortly after the NRA’s success last month in blocking an attempt in Congress to expand background checks for purchases of firearms. More than 7,000 people are expected to attend, the Houston Chronicle said. 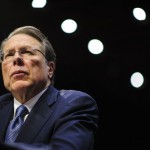 Gun-control advocates are expected to demonstrate their opposition outside the George R. Brown Convention center during the NRA meeting, the newspaper said.

“I don’t think it’s a losing battle at all,” said Heather Ross, an organizer of an “Occupy the NRA” movement, said. “The concept that we’re all a bunch of gun-toting crazies (in Texas) is inaccurate. That’s largely pushed by people elected to office.”