VERMILLION, S.D. – The Panthers put on an offensive clinic at the DakotaDome on Saturday, beating South Dakota 58-14.

VERMILLION, S.D. – The Panthers put on an offensive clinic at the DakotaDome on Saturday, beating South Dakota 58-14.

In the regular season finale, UNI came just a touchdown shy of setting a new record for points scored in the first half with an explosive offense. In just the first half alone, the Panthers had seven touchdowns, 418 yards of offense, and two recovered turnovers. By the time UNI won the game 58-14, they had their best performance offensively with 593 yards of total offense.

Quarterback Theo Day set a career-high in passing yards with 380 against the Coyotes, making 21 completions on 31 attempts. Day threw five touchdowns to five different receivers along with scoring his fourth rushing touchdown of the season. Sergio Morancy led all receivers with 135 yards on four catches with one touchdown while Vance McShane was the Panthers leading rusher at 94 yards on 14 carries.

UNI hit the gas early, scoring its first of seven touchdowns on the first drive of the day. After a long completion to Sergio Morancy, Day made a short seven-yard pass to sophomore tight end Layne Prior for his first career touchdown. The Panthers soon found themselves back on offense as the defense forced the Coyotes to a second straight four and out.

Day connected with Morancy again on the second drive, only taking four plays to find a hole. The sophomore walked in a 36-yard pass, beating his defender just past the five-yard line. UNI scored a touchdown on each of its first six drives, not having to punt until a third of the way through the second quarter.

Two of the Panthers scoring drives came off of South Dakota turnovers. During the first drive of the second quarter, Woo Governor recorded his fourth pick of the season after finding the ball in wide open space around the middle of the field. Just two drives later defensive back Damien Crumitie forced his first fumble as a Panther from Coyote running back Travis Theis. The ball was then scooped up by Cameron Baker for his first career fumble recovery.

All of UNI’s touchdowns would come in the first half while kicker Matthew Cook made three field goals in the third quarter. Cook’s first field goal of the game, a 26-yarder in the fourth minute of the quarter, made him the UNI and Missouri Valley Football Conference all-time leader in made field goals at 65. Cook ends the season with 14 made field goals and 67 career-made field goals with one more year of eligibility.

Up 58-7 with less than a quarter to go, the Panthers swapped out a handful of starters, including Day. For the final 14 minutes, both Aidan Dunne and Matt Morrissey got looks at quarterback while Terence Kamara and Josh Jenkins played snaps at wide receiver and running back. UNI had the ball for the final drive of the game, opting to end in a victory formation as Morrissey took a knee for the final two plays of the season.

It was a day of firsts as two Panthers had their first touchdowns (Layne Pryor and Noah Abbott), and two Panthers had their first turnovers (Damien Crumitie; forced fumble, and Cameron Baker; fumble recovery).
With 380 passing yards today and 3,121 on the season, Theo Day now has the fifth-best passing season in Panther history. He sits just behind Mike Smith who had 3,125 passing yards during the 1986 campaign. Day’s season passing record also puts him in the top 10 for pass completions and passing touchdowns.
This was the seventh game this season where the Panthers had a different player score each touchdown. But Saturday’s game had the most offensive touchdowns of the season with seven.
UP NEXT 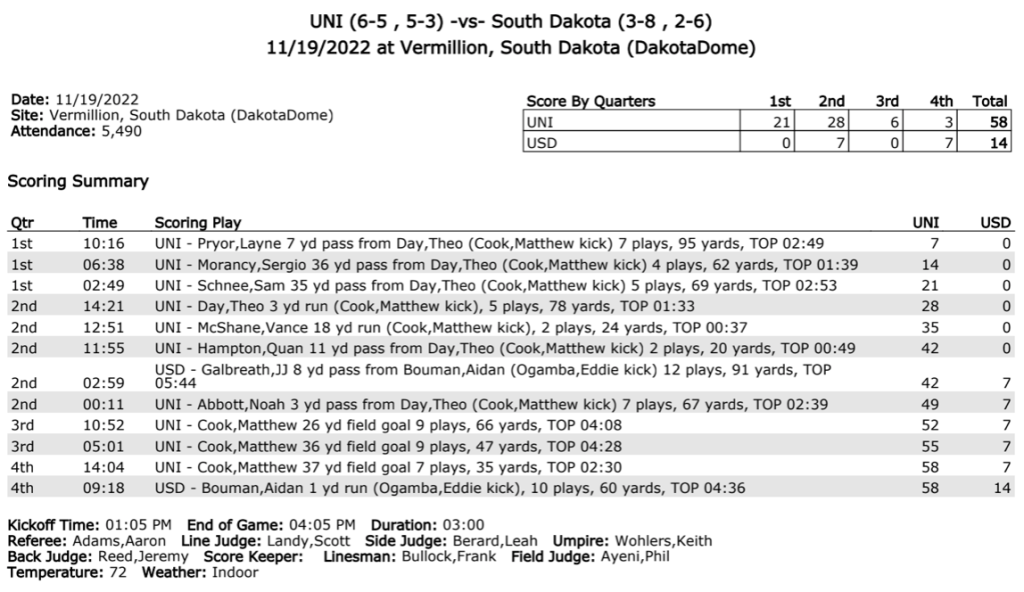