Ashley Joens set a new career high of seven made 3-pointers, notching the mark on just 10 attempts from deep. Joens notched 33 points for the 16th game of her career with 30-plus while adding 10 rebounds for the fifth-year senior’s third double-double of the season and 52nd of her career.

The Cyclones held a 13-point lead over the Lions following the first period, with Joens shooting perfect with five made field goals to tally the 800th of her career. Iowa State continued to command the court, holding a 24-point edge over Columbia at halftime. ISU was led by Joens with 21 points in the first half as the Cyclones shot nearly 60 percent from the field and held the visitors to 33.3 percent shooting. Iowa State went on to finalize the game on 53.2 percent shooting while recording 12 triples.

Three hit double figures led by Joens followed by Stephanie Soares with 15 and Emily Ryan with 13. Soares also totaled five rebounds, two blocks and an assist in 21 minutes of play.

How it Happened
Iowa State converted its first four shot attempts to lead 11-3 while the Cyclones stole the ball twice in the first two minutes of the game. Columbia trimmed the deficit to four at 15-11 before three-straight 3-pointers pulled the Cyclones ahead 24-11. ISU continued hitting shots from deep, led by Joens shooting a perfect 4-of-4 as Iowa State totaled six in the first at 54.5 percent.

Soares continued shooting without a miss in the second quarter, notching her fifth field goal to put the Cyclones up by 17 with 5:37 on the clock. Columbia took six-straight on a pair of 3s to put the scoreboard at 43-30, but ISU answered with two more of its own to total eight in the half.

Another Cyclone 3-pointer opened the second half, made by Ryan to become the fifth Cyclone to hit a triple. Morgan Kane then brought in six points in just over a minute of action, bringing the score to 66-42. Maggie Espenmiller-McGraw recorded the 11th 3-pointer with 36 seconds to go in the third to take a 80-52 lead into the final frame.

Joens ascended the 30-point mark on her seventh triple to hit the career high with 9:09 left in the game. The Cyclones never let up to seal the 23-point victory.

Players of the Game
Ashley Joens hit the 30s for points for the first time this season while connecting on seven of the Cyclones’ 12 made buckets from long range. Joens had now made 270 3-point career field goals and stands four away from tying the fourth-most in program history.

Up Next
No. 7 Iowa State heads to Portland, Ore. For the Phil Knight Invitational, meeting Michigan State on Thursday, Nov. 24 at 6:30 p.m. The game will be nationally broadcasted on ESPNU. 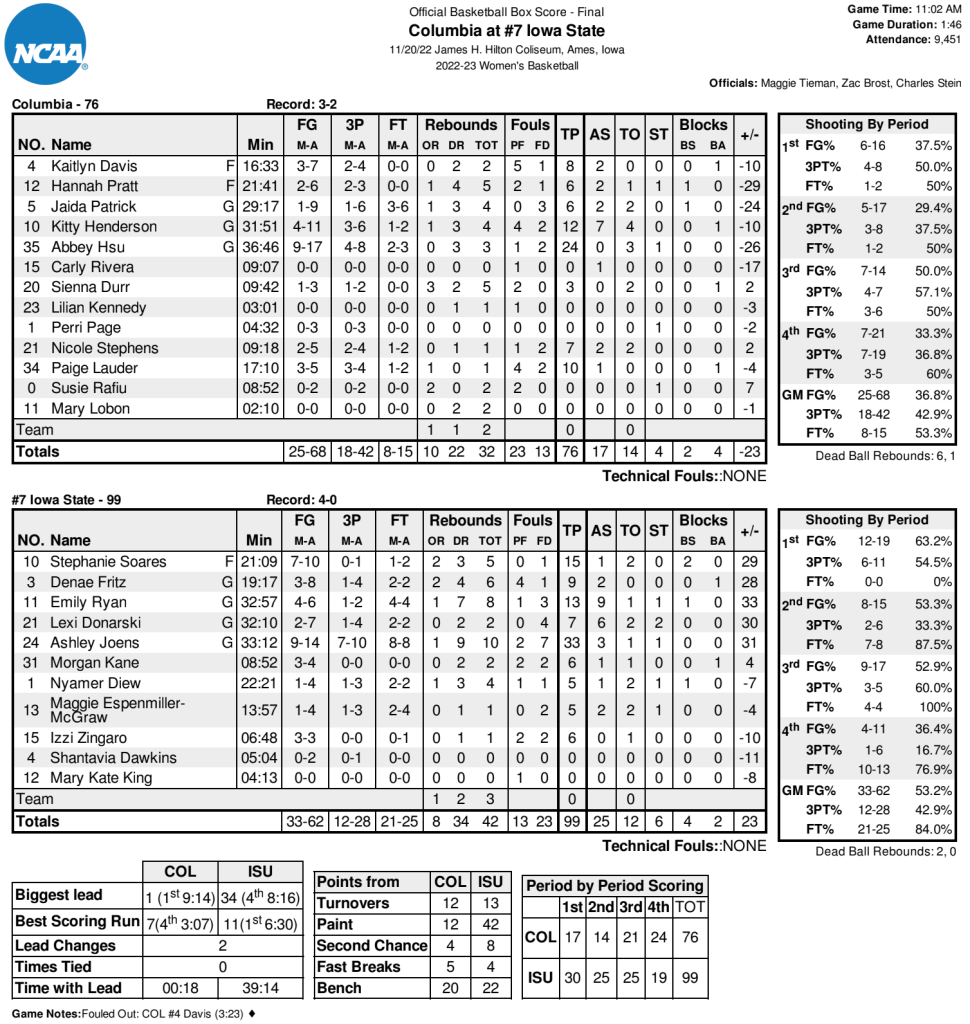