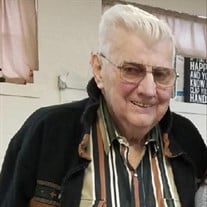 Richard Charles Schany passed away at the age of 90 surrounded by his loved ones on March 23, 2022 at the Palo Alto County Hospital in Emmetsburg. Mass of the Christian Burial will be 10:30 AM on Monday at the Immaculate Conception Catholic Church in Graettinger. Burial will take place in the St. Jacob Cemetery in Graettinger. Visitation will be 3-6 PM followed by a Rosary at 6:00 PM Sunday at the church and 9:30 AM Monday until service time.

At the young age of 17, Richard enlisted in the United States Marine Corps and proudly served in the Korean War. He was awarded four medals during his enlistment. There are a many good stories and tales he continually talked about his time in Korea. He knew a couple of songs he could sing in Korean if he had enough priming fluid.

Richard and Bettie Marie were married September 17, 1953 at Immaculate Conception Church and lived in Los Angeles, California for five years. Until the day Richard came home and had enough of the LA life and traffic and moved back to Iowa. They first lived on a farm southwest of Graettinger and then in town for several years more. In 1971, they purchased Richard’s parents home place, the BAR X, where he lived the rest of his life. Richard and Bettie Marie first moved in the house that Richard’s parents raised most of their family in. The house was rather dated and was told by some to be the first framed house built between Emmetsburg and Spirit Lake. They eventually needed an upgrade and moved a house from Estherville down to the farm.

Richard was in the construction business. He started Graettinger Sand and Gravel and later changed the name to Schany Construction Inc. He began by hauling gravel and dirt with his truck and dozed down groves and old buildings. Eventually he specialized in tiling, excavating and installing sewer and water mains for various towns. When first started his business, he did a bit of horse trading as payment for work he did. He collected a few old cars as payment and few of them are in his shop yet today.

Richard was always bringing home some odd or different animal to make into pets. The farm was filled with rabbits, fox, deer, squirrels, skunks and geese.

After retirement in his early 80’s, he became quite the lawn mowing expert and continually added more area to mow. He mowed the pasture and did trails through the timber after the horses were sold. He even had to have a backup mower in case one broke down.

Papa Schany loved to play with the grandkids and enjoyed the hell out of teasing them. He had all the toys for the kids to use. Horses, motorcycles, snow mobiles, go-carts and mopeds.

Never got on a plane until Bettie Marie planned a vacation to Australia and New Zealand in 2001.

He was a life-long member of the Immaculate Conception Church.

Richard was blessed that he was able to live at home until his death. Shawn and Tonya were able to help with his daily routines and because he was always concerned about going into a nursing home.

Richard is preceded in death by the love of his life, Bettie Marie, on July 9, 2003, his son Monty James Schany and his grandson Bryce Richard Schany. He is also preceded in death by his immediate family members, father’ Leo, mother’ Lorretta. Siblings; Bill, Bob, Mickey, Mary, Alice Josephine, Ruth, Tom, Joan and Gene.

Richard, Dad, Grandpa and papa we love you. We are grateful to have had you in our lives for an incredible 90 years. You will be missed beyond measure. Give mom a kiss for us.