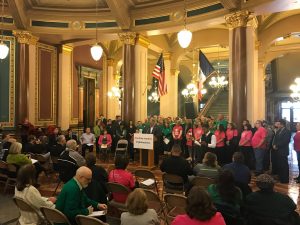 DES MOINES – Today, AFSCME Council 61 President Danny Homan spoke at a Capitol press conference for the first day of the 2017 legislative session with many progressive partners.

The following are his remarks:

Now those are important words. Words that I believe should be remembered as we enter in to this legislative session. A session where the rights of public employees and the quality of public services available to the citizens of Iowa could be under threat.

But those words aren’t my words. Those are the words of the chairman of the Republican Party of Iowa, Jeff Kaufmann. Words he chose to express in 2008 as a State Representative, when Democrats had control of the House, Senate and Governor’s office.

Many of his fellow Republicans during that time also echoed his call for balance and bipartisanship over a collective bargaining law that has worked well for Iowa’s public employees, government and taxpayers for three, now four, decades.

Today, we enter a new legislative session where we’ve heard there might be a number of proposed bills aimed at either reducing, restricting or even abolishing the collective bargaining rights of more than 180,000 workers who provide the vital services that keep our state working.

Correctional officers who keep our state’s most dangerous locked up where they belong. Mental Health Professionals who care for some of the most vulnerable among us. Police officers, firefighters and first responders who risk their lives to keep us safe. Nurses, teachers, highway workers and other professionals working vital jobs who we count on in our communities every day.

It is my hope that when our legislators take their seats in this 2017 session, they will take caution and care to include the minority party and those citizens affected by any changes to these laws—as then-representative Kaufmann stated so well back in 2008.

And I ask every concerned citizen across the state to contact their elected legislators to voice your support for collective bargaining rights. To attend legislative forums held in your local communities, and to have your voice heard on this issue.

[off-script remarks] Now before you leave today, please take a moment to visit our state flag in the display case. It reads, ‘Our liberties we prize and our rights we will maintain.’ So when you’re showing up at legislative forums or talking to your legislator upstairs about collective bargaining, you are put our state’s motto into action. Go out there and defend our liberties and maintain our rights.
Thank You.”