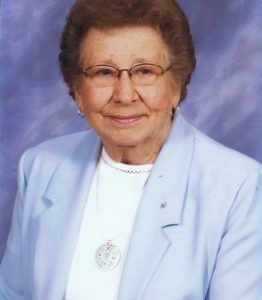 Wilma L. Refsell, daughter of William and Kathryn (Lammers) Herke, was born on August 23, 1925 in Claremont, Minnesota. She passed away at her home in Estherville on March 27, 2022 at the age of 96 years.

Wilma graduated from Graettinger High School in 1943. She was united in marriage to Robert Refsell on June 30, 1946 in Graettinger, Iowa. The couple made their home in rural Wallingford. She kept busy raising her children and working around the farm. The couple retired in 1988 and moved into Estherville.

Wilma was a member of the Wallingford Lutheran Church, where she was active in the WLCW and the Ladies’ Circle. Wilma enjoyed quilting, crocheting, embroidery, sewing, baking, and square dancing. She also enjoyed being outdoors, especially camping, fishing, and gardening. Spending time with her grandchildren and great-grandchildren were her favorite things to do. The couple enjoyed wintering in Texas for many years.

She is preceded in death by her parents, husband Robert, sisters Arlene Henkelvig, Alice Kathman, and Esther Anderson, and brother August Herke.