CEDAR FALLS – UNI men’s basketball overcame a 17-point second half deficit on Tuesday night as the Panthers rallied to defeat the Indiana State Sycamore 80-74 in overtime at the McLeod Center.

The Panthers’ record jumps to 8-7 on the season and as UNI picked up a fourth straight Missouri Valley Conference (MVC) victory to improve to 4-1 in league play. Indiana State falls to 8-7 and 1-2 in conference action.

UNI struggled to maintain possession of the ball throughout the first half, allowing the Sycamores to score in transition off of early turnovers. Indiana State also found success from beyond the arc with 6 three-point baskets in the first 20 minutes of play. UNI would pull within one point with 3 minutes to go before halftime, but the Sycamores extended the lead late, scoring on 4 of 7 possessions to close the half and send the Panthers into the locker room trailing 38-30.

Indiana State took a 17-point lead with 13:55 to go in the second period before the UNI offense began to find its rhythm. Noah Carter knocked down 4 shots from distance as the Panthers began to clamp down off the glass with 6 offensive rebounds in the second frame. Forcing 9 Sycamore turnovers in the second half, UNI pulled even on a Nate Heise three-point field goal to tie the game at 65. In the final seconds of regulation, with Indiana State leading by 2 points after a pair of free throws, AJ Green sent the game to overtime on a mid-range jumper with 18 seconds to go.

With the Sycamores in foul trouble in the extra stanza, the Panthers held Indiana State to just 2 points on one made field goal, icing the game away with 6 points from Heise, as well as a pair of Trae Berhow free throws.

Carter led the way for UNI with a 17-point performance, his fifth straight conference game with at least 15 points scored. Green posted 16 points for the Panthers, including a perfect 6-for-6 ledger at the free throw line. Bowen Born notched a new season-high in scoring for the second straight game with 14 points, and dished out a team-high 5 assists. Berhow posted 7 points and 8 rebounds for UNI, while Austin Phyfe blocked 2 shots on defense.

PANTHER NOTES
Under Ben Jacobson, the Panthers are now 27-14 in games against MVC programs with a first-year head coach. UNI is also 15-6 during that timespan when facing an MVC first year head coach for the first time.
UNI is 72-8 in games when the offense scores 80 or more points under Ben Jacobson.
The Panthers have won 4 consecutive games for the first time since winning 6 straight games in late January/Febraury 2020.
Tuesday marked UNI’s first overtime game since Feb. 27, 2021 when the Panthers defeated Illinois State on the road.
Trae Berhow moved up to 34th on UNI’s all-time scoring list with 1,053 points, passing Johnny Moran (2008-12).
Austin Phyfe is 60 points from passing his father, Steve Phyfe, in career points scored for the Panthers (853). Steve Phyfe, who played at UNI from 1987-90 and was part of the program’s first-ever NCAA Division I Tournament team in 1990, scored 912 career points for the Panthers, ranking 55th in program history.
Tywhon Pickford’s 4 points against Indiana State move him up to 80th on the program’s all-time scoring list with 709 career points.
Noah Carter’s 17-point effort against the Sycamores push him into the top 100 list for scoring all-time in UNI men’s basketball history with 591 career points.

UP NEXT
The Panthers return to action on Jan. 15 on the road at Southern Illinois. Tip-off is scheduled for 7 p.m. 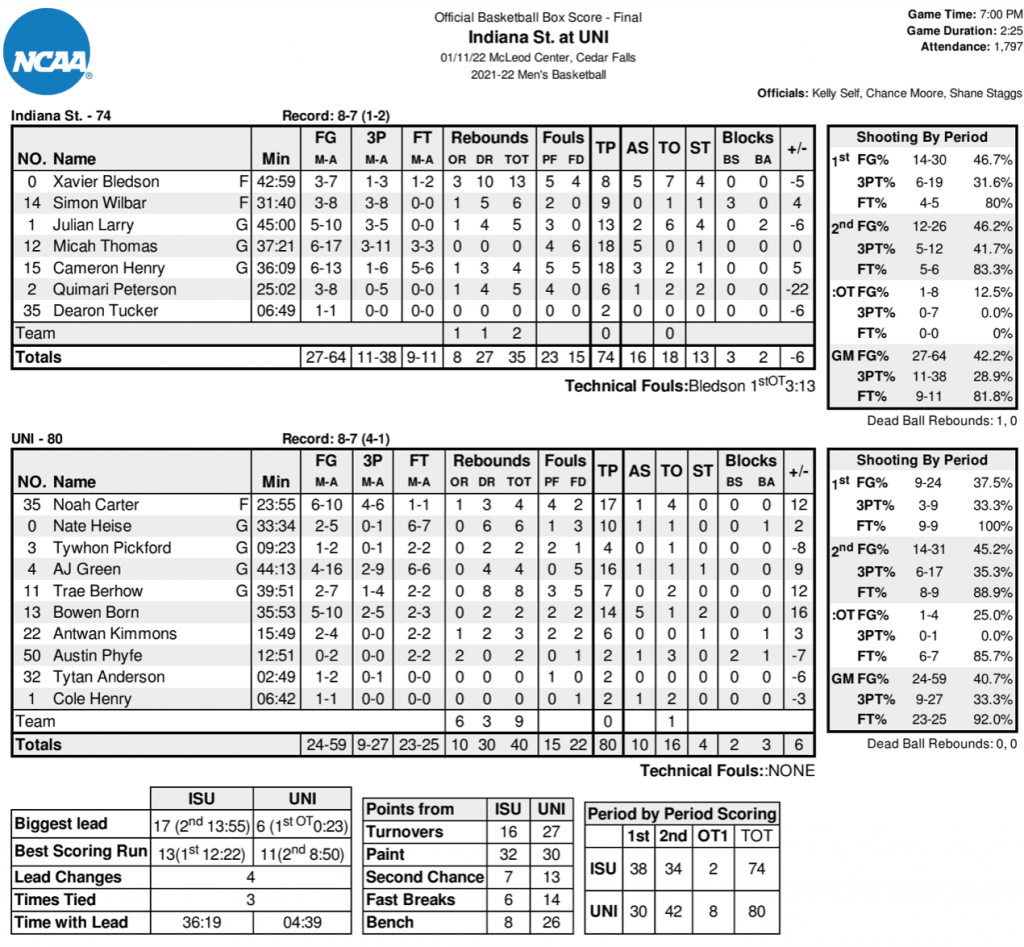