Morgan Kane had herself a career day for Iowa State, going 6-of-7 from the field for a career-high 17 points. Kane added six rebounds and set a new career high with three assists in just 23 minutes of action. Ashley Joens tallied 21 points and 11 rebounds, for her 40th career double-double and fourth straight. Emily Ryan added 16 points and Lexi Donarski rounded out the Cyclones in double figures with 11 points.

Despite getting off to slow offensive start with the game tied 4-4 with 7:44 to go, the Cyclones would find their rhythm after a lob from Ashley Joens over two defenders to Beatriz Jordão for an easy bucket. Ryan would follow with a 3-pointer to give Iowa State an 11-4 lead by the under-5 timeout. Iowa State would hold TCU to just 22.2 percent shooting in the first quarter, as the Cyclones rolled to a 20-10 lead.

Iowa State would double its lead in the second quarter as Ashley Joens led the way with 11 points, six of which came at the charity stripe. The Cyclones would outscore the Horned Frogs 18-8 to take a 20-point lead into the locker room at half, 38-18. ISU had two in double figures at the half with a game-high 17 from Ashley Joens and 10 points from Ryan.

The third quarter was all about Kane, as the redshirt junior put herself in scoring position for the Cyclones, tallying eight points. Kane also hauled in four boards and added an assist, as she helped ISU maintain its sizable lead, 60-37, over TCU heading into the final stanza.

Kane would keep up the pressure, tallying six points in the first four minutes of the quarter, before earning a seat on the bench. In total, the West Jordan, Utah native, scored 14 of her career-high 17 points in the second half. Lexi Donarski unleashed one of her best defensive efforts on TCU star Lauren Heard, holding Heard to just nine shot attempts and four points to her name. As a team, ISU would hold TCU to under 50 points, coming away with a 78-47 win. 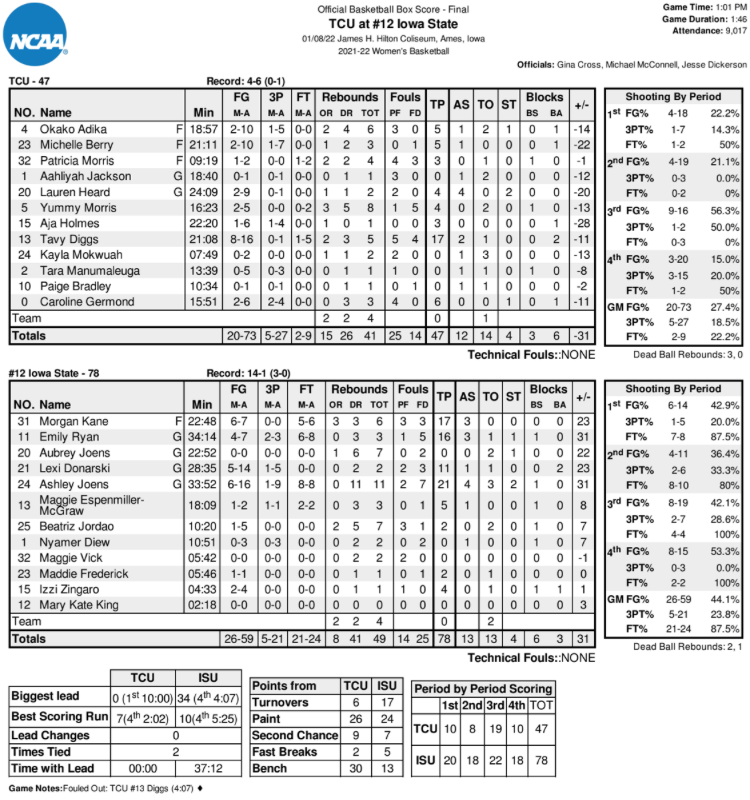