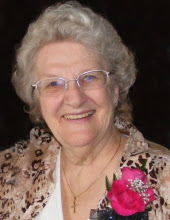 Visitation will be held from 5:00 to 7:00 p.m. on Monday, January 3, 2022 at Hauser Weishaar Funeral Home and continue one hour prior to the service on Tuesday at the church.

Geraldine Lee (Fisher) Spurbeck, the daughter of Louis and Elsie (Rimrod) Fisher, was born on September 21, 1933 in Charles City. She graduated from Charles City High School. She was united in marriage to Loyd “Butch” Spurbeck on July 19, 1952 at Saint John Evangelical Lutheran Church in Charles City. To this union, five children were born: Theresa, Steven, Mark, Michelle, and Eric.

Jerry began working as a soda jerk at Field Drug. She then was a manager at Mr. Good Drive-In. She later worked for Hovey’s (now Buy Low North) for many years until her retirement. She was a member of Saint John Evangelical Lutheran Church, Elks and Moose Lodge in Charles City.

Jerry enjoyed playing cards and games on her phone. She loved to knit and made hundreds of washcloths and knitted many prayer shawls and blankets that she donated. Jerry helped her daughter, Terry, with many craft shows in the area throughout the years. Jerry looked forward to her annual girls’ weekend that occurred every Memorial weekend with her daughters, granddaughter, and great-granddaughters.

She was preceded in death by her parents; husband, Butch in 1985; two sisters: Helen Whitney and Darlene Greenman; and three brothers, Pete Fisher, Russel Fisher, and Larry Fisher.