The win was the Cyclones’ first over the Hawkeyes since 2015 and reduced Iowa’s lead in the all-sport Iowa Corn Cy-Hawk Series to 9-6 heading into tomorrow night’s men’s basketball contest at Hilton.

The Joens sisters, natives of Iowa City, were the stars of the night. Ashley led Iowa State with 26 points, 11 rebounds and a career-high tying six assists. Aubrey got her third double-double of the season, posting 12 points and 11 rebounds. Lexi Donarski joined them in double figures, finishing with 16 points.

After the visitors got the first four of the contest, the Cyclones were able to put together an 8-0 run, four points form Ashley Joens, to move ahead at 10-6. Both sides had their areas they took advantage in. The Cyclones were able to get easy points, getting 14 points in the paint and two from the free throw line. Meanwhile, the Hawkeyes hit 3-of-6 on 3-pointer attempts and blocked five ISU shots. The Cyclones took the first quarter lead when Emily Ryan intercepted a Kate Martin pass and went to the rim for a lay-in and a 19-17 lead.

Iowa State’s offense exploded to begin the second quarter, with 3-pointers from Ryan and Aubrey Joens and a pair of Ashley Joens buckets bringing the advantage to double digits at 31-20. ISU was able to weather the storm of Ryan heading to the bench with two fouls, Aubrey Joens hitting another three to make the lead a dozen at 34-22. Iowa was able to make a late run, scoring nine of the final 11 points in the period to reduce the Cyclone lead to 36-31.

The Hawkeyes moved back ahead with a 9-0 run in the third quarter to put the visitors ahead 45-43. The Cyclones continued to hold tough, and eventually strung together a 7-0 run capped by a Ryan coast-to-coast steal and lay-in to make it 54-49. Aubrey Joens drained her third 3-pointer of the game to make it a six-point advantage, but Caitlin Clark hit a 3-pointer in the final seconds to reduce the ISU lead to 57-54.

Iowa State worked ahead by seven at 63-56, and Aubrey Joens was able to find her fourth 3-pointer of the contest to restore the Cyclone advantage to nine at 70-61. Iowa had one last fightback to make, with Gabbie Marshall hitting a 3-pointer to cut the ISU lead to four at 70-66. However, ISU was able keep its cool at the charity stripe and was able to ice the game in favor of the Cyclones.

Ashley Joens led Iowa State with her fifth double-double of the season and 36th of her career, notching 26 points and 11 rebounds. She also shared the rock well, tying her career high with six assists. During tonight’s game, Joens moved up to No. 3 on ISU’s all-time scoring list, moving past Megan Taylor and Lindsey Wilson and now sits on 1,888 career points.

Aubrey Joens got her third double-double of the season, getting 12 points (all on 3-pointers) and 11 rebounds.

Lexi Donarski finished with 16 points on 5-of-11 shooting and has been in double figures in nine of 10 contests this year.

No. 15 Iowa State returns to Hilton Coliseum on Sunday to take on UNI. Tip between the Cyclones and Panthers will be at 5 p.m. on Big 12 Now on ESPN+. Iowa returns home on Saturday, Dec. 18, hosting Central Florida inside Carver-Hawkeye Arena. Tipoff is set for 6:30 p.m. CT on B1G+. 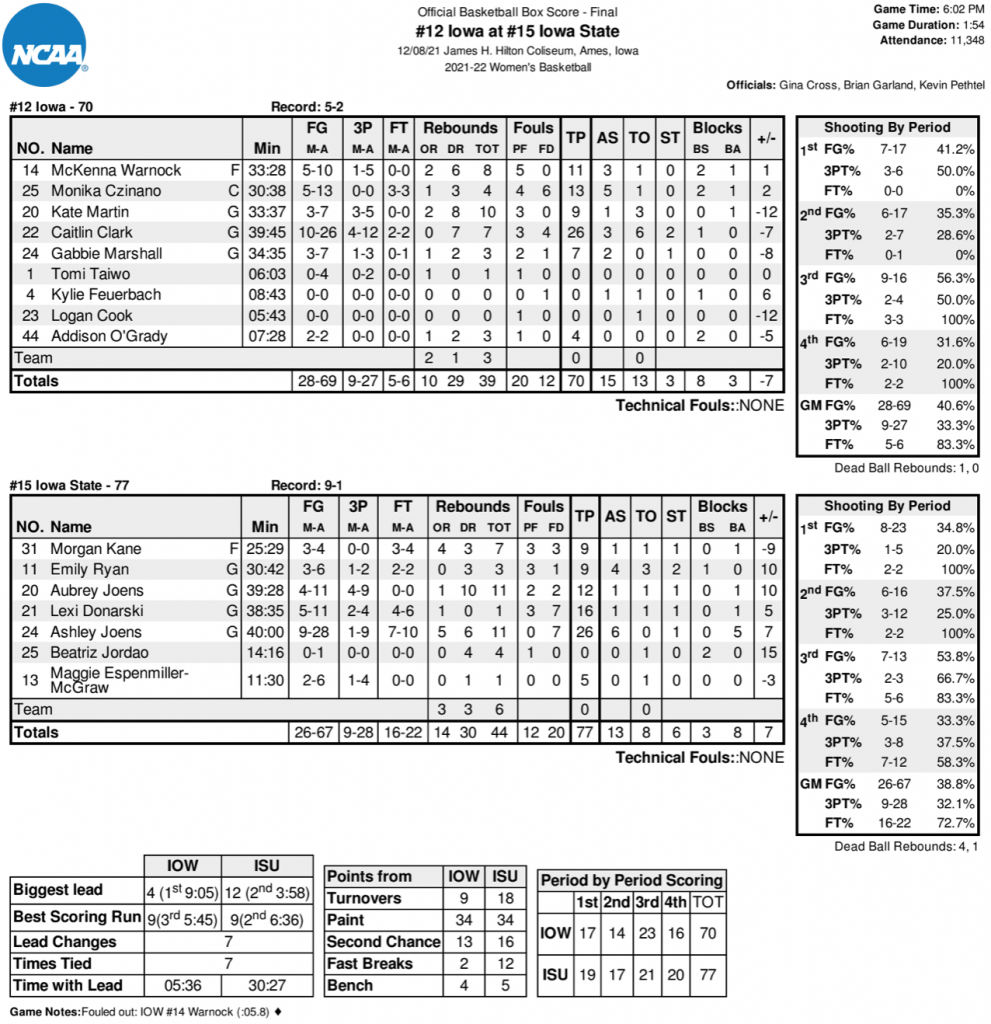