Secretary of the Treasury Janet L. Yellen says Build Back Better Act is great for America as House passes the legislation

This news story was published on November 19, 2021.
Advertise on NIT • Subscribe to NIT

Secretary of the Treasury Janet L. Yellen released a statement todayon the impact of the Build Back Better legislation.

“The Build Back Better Act will improve the lives of workers, grow our economy, cut taxes for the middle class, and lower costs for families on a wide range of household expenses, such as child care and prescription drugs. 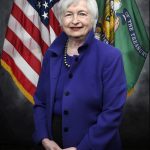 The combination of CBO’s scores over the last week, the Joint Committee on Taxation estimates, and Treasury analysis, make it clear that Build Back Better is fully paid for, and in fact will reduce our nation’s debt over time by generating more than $2 trillion through reforms that ask the wealthiest Americans and large corporations to pay their fair share. A particularly salient aspect of the revenue raised by the legislation is a historic investment in the IRS to crack down on high-earners who avoid paying the taxes that they owe, which Treasury estimates would generate at least $400 billion in additional revenue.

With this bill, members of Congress have a unique opportunity to put our economy on a path to increased growth, productivity, labor force participation, and equity, while ensuring we do not burden future generations with unsustainable debt. I urge them to pass it.”

The bill must be passed by the Senate, next, before the President can sign it into law.

6 Responses to Secretary of the Treasury Janet L. Yellen says Build Back Better Act is great for America as House passes the legislation