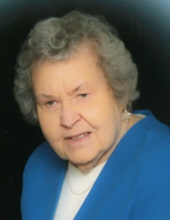 A funeral service for Margaret Stillions will be held at 11:00 a.m. on Tuesday, July 6, 2021 at Hauser Weishaar Funeral Home in Charles City with Pastor Coulter Page of Bethany Alliance Church officiating. Inurnment at Sunnyside Memory Gardens will be held at a later date.

A visitation will be held one hour prior to the service on Tuesday, July 6, 2021 at Hauser Weishaar Funeral Home. Due to the health concerns of immediate family members, we are requesting that visitors who have not been vaccinated wear a face mask at the visitation and service.

Margaret Ann Hartmann (Meyer) Stillions was born November 6, 1929, in Charles City, the only child of Frank A. and Ethel E. (Crooks) Hartmann. She graduated from Charles City High School in 1949 and attended one year at Northwestern Bible School in Minneapolis. On January 16, 1960, she married Clarence E. Meyer at the Little Brown Church in Nashua. Margaret and Clarence raised their family of 5 children on an acreage east of Charles City. When the health of Margaret’s parents began to fail, they sold the farm and moved to her parent’s farm to help care for them.

Margaret was a member of the East Saint Charles Community Club and enjoyed meeting with other farm wives in the area. She also was a member of the American Legion and enjoyed their fund-raising efforts for our veterans. Margaret worked a short time in housekeeping at Salsbury Baptist Home. Clarence and Margaret attended Bethany Alliance Church. In their retirement years, Margaret enjoyed traveling with Clarence to his World War II reunions throughout the United States. In December 2005, Clarence passed away. On June 23, 2012, Margaret married Admiral Stillions and moved to his home in Bolivar, Missouri. They recently celebrated their 9th wedding anniversary.

Margaret’s greatest joy was spending time with her family – especially her grandchildren and great grandchildren. She looked forward to having her family come home for the holidays and preparing a great feast for all to enjoy. She faithfully attended the Crooks family reunion every July in Nashua. Margaret enjoyed gardening and planting flowers. You could see her love for flowers at every home where they lived in Charles City.

She was preceded in death by her parents, Frank and Ethel Hartmann; and husband, Clarence Meyer.

Memorial may be directed to the family.