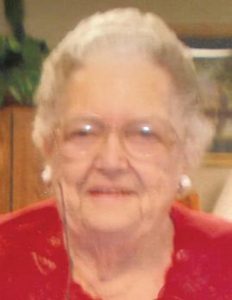 Eleanor Jane Miles was born January 2, 1929 to Glen D. And Thelma (Jones) Miles and grew up two miles North of Saratoga. Even though it was the Great Depression she remembered a home filled with good food, music, and laughter. Her mother “could cook anything”, her dad played piano by ear and entertained at neighborhood dances often writing his own parody songs, and her brother “Boomy” was always pulling practical jokes. Her sister, Erma, was born the same year and they were constantly being mistaken for twins. She had a special relationship with younger sister Konnie when Thelma died of cancer and Eleanor stepped in as a surrogate mother.

After graduating from Riceville in 1946 Eleanor taught country school near Saratoga even though she was just slightly older than some of her students. Two years later she married Richard Bower at the Little Brown Church, and moved to the house and 80 acres Northwest of New Haven that he had inherited as a child. They lived on the farm until retirement. Eleanor never cared for farm work and returned to teaching in 1953. She intended to work until she earned enough money to buy an electric organ, but taught forty years – two years back in Saratoga, six years in Burr Oak township, and then thirty-one years in Osage where several generations of 4th graders knew her as “Mrs. B.” Eleanor was able to teach right out of high school with a War-time license, but attended night school and summer classes until she earned her two-year degree from Mason City Junior College and four-year degree from Upper Iowa University in Fayette. Despite the fact she’S been retired for nearly three decades people still stop her children on the street to say “Your mom was my favorite teacher” or “Mrs. B. Is the one who straightened me out.”

Eleanor was very fond of her in-laws – John and Ethel – who lived right across the road on the farm. She and Dick had four children: Brenda in 1949, Monica in 1952, John Eric in 1953, and then tag-along George (originally named Glen) in 1967. Eleanor bowled, belonged to the ADK Teacher’s Sorority, and she and Dick belonged to the same card club for forty-one years. During the 70’s they spent almost every weekend following their son Eric’s band – The Circle K. She helped with bible school and directed the church Christmas program for several decades, and every summer raised 300 chickens she would butcher the week before school started.

Eleanor had always wanted to live in town, and finally persuaded Dick to move to Osage after they both retired in 1993. Almost immediately he told her “We should’ve done this years ago.” About that time, she also acquired the new nickname “Ellie”. After retirement Ellie and Dick made several trips to Arizona and Florida and enjoyed going to shows in Branson. Dick died of a sudden heart attack in 2008 at age 80 and Eleanor moved to the Evergreen Apartments one year later. She kept busy playing cards several times a day, playing her organ, reading, crocheting, and visiting Diamond Jo Casino every chance she got. Eleanor lived to see her youngest grandchild graduate just a month before her death.

Eleanor was preceded in death by her husband, Dick; her parents; her parents in-law; Three brothers and one sister; daughter Brenda Klehn; Granddaughter Becky Hall; and Son-in-Law Henry Rgnonti. She is survived by her sister Konnie Russel of Phoenix, Arizona; daughter Monica Rgnonti of Lakeville, Minesota; Son Eric and his wife Verna of Robbinsdale, Minnesota; Son George and his wife Lori of Spirit Lake, Iowa; Son-in-Law Jim Klehn; and many grandchildren and great grand-children.