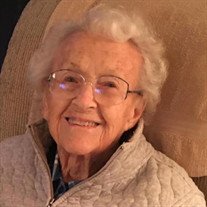 Irma Charlotte Bokelman, 97, of Ventura, IA passed away Thursday, May 6, 2021, at Oakwood Care Center, Clear Lake, Iowa where she had been a resident the last 20 days. Per her wishes a family funeral service will be held and her interment will be at the Clear Lake Municipal Cemetery. In lieu of flowers memorials may be directed to the Redeemer Lutheran Church, Ventura, IA or to MercyOne North Iowa Hospice, Mason City, IA.

Irma was born near Whittemore, Kossuth County, IA on January 26, 1924 to Ferdinand Henry Schultz and Meta (Dau) Schultz. She was the sixth and last child born to her parents. As she was the shortest child by 7 to 12 inches she always thought her parents had run out of tall genes by the time they got to her. During the depression her parents lost their farm near Whittemore and moved near Miller, IA where she attended grade school. Later her folks moved to Ellington Tswp, Hancock County and she became a high school student at Forest City where she graduated in 1942. Irma was slated to go to work for the FBI in Washington, DC, but ended up staying home to take care of her ailing mother. When she moved to Clear Lake Township to keep house for her Father and two brothers, little did she know that she would be moving to her permanent neighborhood for the next 75+ years. She lived next to her future husband, Henry H. Bokelman. They were married June 22, 1946. After Henry’s army career they permanently moved to the place next door where they farmed and raised 4 children.

Irma was very active on the farm and much preferred to be outside as much as she could. She drove most tractors and pieces of equipment on the farm as well as working with chickens, hogs, cattle and sheep well into her 70’s. She also liked gardening, sewing, cooking and quilting. Irma was well known in the neighborhood as a good cook. Her husband, kids, grandkids, neighbors and hired help made special mention of her home-made pies and dinner rolls. Neighbors said that her pies were reason enough to come help when needed. And kids, grandkids and their friends always went away with a few homemade rolls. Her oldest grandson figured she made around 500,000 rolls in her life.

Irma was part of the community as well. She was a founding member of the Redeemer Lutheran Church in Ventura, member of Dorcas, Quilting Circle, Music Mothers, PTA, North Side Jolly Club, and sat on the Election Board for decades.

Her love of her Church, Family, and friends was always evident. And she cherished her friendships-old and new. Her friends were of all ages and she made many lasting connections.

During her life she survived and thrived. She lived through the depression and through polio. She enjoyed adventures of fishing (she usually caught the big ones), hunting, domestic and international travel with her husband, family and friends. She was always ready to hop in the pickup to drive around the neighborhood or any other place you wanted to go.