It was ISU’s largest win over UT in the series (29 points).

The Cyclones dominated the entire game, never trailing and leading by as many as 30 points. Jacobson and Solomon Young set the trend with outstanding post play. The duo combined for 38 points – Young had 17 – and 12-of-14 shooting from the field.

Iowa State shot very well, connecting on 57.1 percent of its shots and held UT to 29.3 percent from the floor. The Cyclones also owned the glass with a 40-27 advantage, as Jacobson grabbed a season-high 13 caroms.

How It Happened
Young scored eight of ISU’s first 10 points to give the home team an early 10-2 advantage. Another 10-2 run later on pushed the Cyclone lead to 26-13 with 7:47 remaining in the first half. Young tallied four more points in the run.

The Cyclones at one point stretched their lead to 17 points and went into the break with a 37-26 lead. Young had 14 points in the opening period to pace the Cyclones.

Iowa State scored the first nine points of the second half behind 3-pointers from Nixon and Rasir Bolton, as the Cyclone lead ballooned to 46-26.

Jacobson kept the Cyclones going by burying back-to-back buckets to give the Cyclones a 58-32 lead with just over 10 minutes remaining.

The Cyclones were never threatened for the rest of the game.

Players of Note
Solomon Young has stepped up in the absence of Cyclone star Tyrese Haliburton. Young tallied 14 of his 17 points in the first half to help the Cyclones take control early. He also showed effort in all phases, tallying five rebounds, two blocks and a steal.

Michael Jacobson had one of his best all-around games as a Cyclone, pouring in 21 points and grabbing 13 rebounds. It was the senior’s first double-double of the season and seventh of his career. He was active on both ends, grabbing 11 defensive rebounds and making 8-of-9 of his shots from the field. 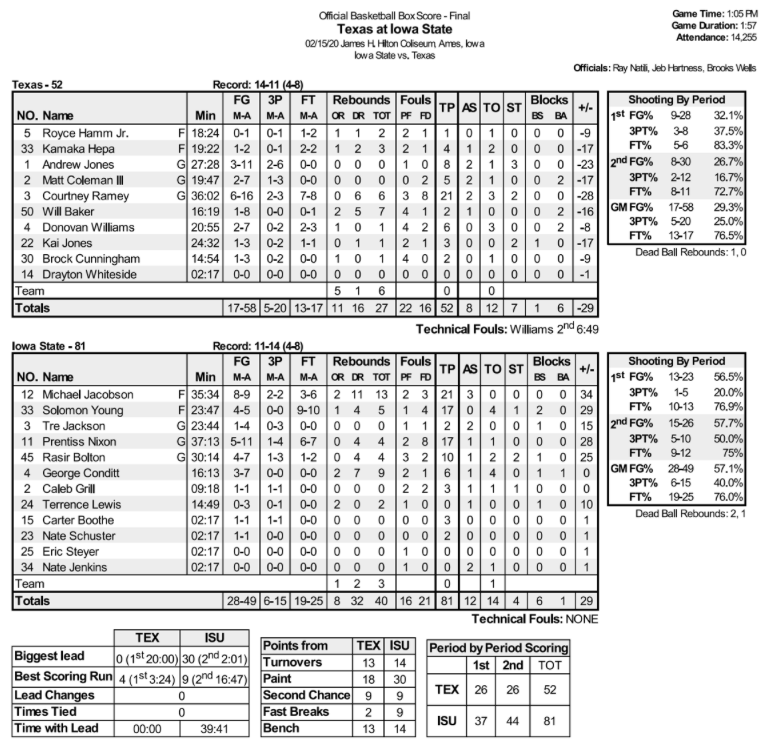