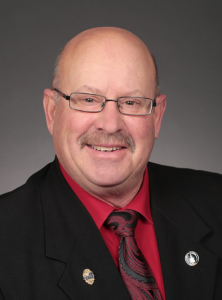 MOUNT PLEASANT – State Sen. Rich Taylor (D-Mount Pleasant), a member of the Iowa Senate Agriculture Committee, today called on Iowans to raise their voices in support of Iowa farmers and against a proposed policy from the U.S. Environmental Protection Agency (EPA) that could cripple rural America by weakening the Renewable Fuel Standard (RFS).

“The proposed rule by the EPA is contrary to an ethanol plan announced in early October by the Trump Administration. Another broken promise is bad news for Iowa,” Taylor said. “Like many living in rural Iowa, I believed the Administration was moving toward keeping its commitment to the biofuels industry and American corn growers. Unfortunately, the EPA’s proposed rule sides with the oil industry, not family farmers.”

Taylor says he’s talked to many Southeast Iowa farmers who are worried about the mixed messages they’re getting from Washington, D.C., especially after ongoing tariff wars and bad weather that has created extra challenges for planting, growing and harvesting crops.

One of those farmers is Dennis W. “Denny” Anderson of rural Mt. Union, who farms corn and soybeans in Henry County.

“I’m a lifelong Iowan and farmer, and I can’t figure out what Trump and the EPA think they’re doing,” Anderson said. “Flip-flops and short-sighted decisions that line the pockets of big oil will hurt the ag economy and all the biofuels advancements we’ve made for generations to come. President Trump and our folks in Congress need to be straight with us. We’ve got to have some leadership now, or rural Iowa will tank completely.”

The Iowa Corn Growers and other commodity groups have objected to the EPA’s plans for the federal Renewable Fuel Standard, including during an EPA-sponsored forum today in Ypsilanti, Michigan. The RFS was established to promote the use of renewable fuels and to replace fossil-based fuels.

Before the November 29 deadline, Iowans can visit the Iowa Corn Growers’ user-friendly website —  https://ncga.com/public-policy/stand-up-for-corn/take-action — and send messages in support of Iowa farmers and the biofuels industry to President Trump, U.S. Senators Ernst and other federal officials.