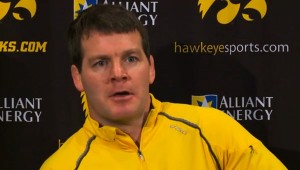 IOWA CITY – The Iowa Hawkeye wrestling team is set for the 2019-2020 season, and coach Tom Brands is preparing his team for another top finish in the nation.

TOM BRANDS: Welcome. This is awesome. I guess my opening statement would have to include Matt Kroul. Iowa weather, love it or leave it. Matt Kroul’s teammate, Ricky Stanzi. Kroul had a record number of starts and lets add one more to it, only a Hawkeye wrestling start. So we’re fired up to be here.

A lot of similarities between that work ethic and Ferentz and our program, so I’m glad to be here. We have a lot to talk about. I don’t know if I need to generate the direction of this thing. I think we can just open it up to questions and get the show on the road.

Q. Is there a correlation that you want to show toughness with being out here?
TOM BRANDS: There’s not a correlation of toughness. I think wrestlers pride themselves on being tough. That’s not what we’re trying to show. We’re trying to do something different and include a part of Iowa that is synonymous with wrestling. I mean, Frank Gotch, he wouldn’t even be sitting on these logs, he’d be splitting them. Gable would be splitting these logs for his wood-burning sauna. So it’s synonymous for those types of people, and that’s where I came from. I came from a rural community, and all the baling hay and all that and wood smoke, it’s a part of what everybody in Iowa is about really, or at least their roots.

Q. Spencer Lee is kind of taking that to another level. What are you seeing?
TOM BRANDS: Spencer Lee’s path to the Olympic Games will go through collegiate wrestling, will go through the Big Tens and the NCAA Championships. Spencer Lee can maybe talk to you and I’ll let him speak for himself a little bit, as well, but he will be heavily involved this year. We’re going to need him, and the thing is his best preparation for what he’s trying to accomplish in Tokyo, he knows that it’s through those seven-minute matches. Not because the styles are similar or not similar, however you want to get into that debate, but because there’s a certain amount of toughness that goes into an extra minute and riding time and overtime. So you’ve got to be conditioned to wrestle 11-, 12-minute matches, and that helps Spencer Lee. That’s what he needs.

Q. Is it something unique about Spencer that suggests that he go through a college season rather than redshirt?
TOM BRANDS: I don’t think there’s any uniqueness one way or the other. I think these Olympic redshirts, if you qualify for them, there’s benefits. There’s some guys that are really in it to make the team, but there’s also — it’s a loophole rule, as well. If you qualify, there’s some other guys that are redshirting and your best team could be a year from now, why not take the Olympic redshirt loophole to make it better, and that’s not what we’re doing here. We’re doing what’s best for our individual like we always do, and we’re planning to put our best team on the mat, and that include Spencer Lee, but it also includes nine seniors or ten seniors and Cashman, a 25-pounder that he’s not going to concede that position, but everybody else is saying that he’s the No. 2 guy on our roster at 125, and he’s going to have to be ready to go. He’ll be on the mat in some big dual meet matches for us.

Q. Are any guys stepping up this summer or fall that are pleasant surprises for you?
TOM BRANDS: I don’t really know how to answer questions like that. That’s like you’re getting into predictions and it’s propaganda and it’s rah-rah. People ask me who looks good, if you had to say one guy, the guy that comes to mind for me is Michael Kemerer. He’s healthy, he’s strong. He’s a 74-pounder. That question has been talked about and that theme or topic has been talked about a lot with him. Is he a 74-pounder? Last year he moved up, and then he had the corrective surgeries. He’s a 74-pounder, and so if anybody looks good, he looks good from where he came from. You’re in a sling and you’re on crutches at the same time, there’s been a lot of progress since that, right? So we’re fired up about everybody. We have a lot of guys that are doing good things, but this is a tough sport, and you have to be ready for tough matches, and if you’re not ready and your preparation is off a little bit, you know — it’s easy to talk, but you can be derailed real easy. We have to be tough.

Q. What makes you think you’ve closed the gap with Penn State?
TOM BRANDS: Did I say I closed the gap? I didn’t say that. I think that we have the guys that are putting the work in every day. I’m not going to compare ourselves like every other year. People thought that I was bananas maybe for thinking we could win last year with that high-powered team that Penn State had. Well, all of a sudden Penn State has two more guys from that team because of medicals, which you know, that makes them better. They have three returning champs on their team, right?

I got defensive on that answer. I’m just not a guy that makes predictions, but I love our team. We have a heavyweight that our fans and wrestling pundits are going to like, and I’ll even say that if he does what I think he’s capable of doing, they’re going to love.

Q. How do you go about closing that gap then?
TOM BRANDS: You put good people on the mat. You stay healthy. If you want to talk about that, those are things we can’t control maybe. But you put a good team on the mat and you believe in their lifestyle and work ethic and us coaches have to do a good job, and we’re there. Here’s the thing. We’re upbeat, we’re excited. We have some big dual meets early. We have March, of course. It’s always March that we’re about, and everything leading up to that is going to prepare us for that. So we believe in our guys, and we’ve got to make some strides, though. I mean, we didn’t have performances that we wanted, and even some of the guys that had post-season awards — Spencer Lee has yet to win a Big Ten title. There’s work to do.

Q. Could you talk about the expectations of Iowa fans? You’ve always been part of the tradition of winning here, but has there ever been a double-edged sword?
TOM BRANDS: I think the double-edged sword for me is my expectations are high, and sometimes I talk a certain way and then I get questions asked about why aren’t you basically backing up what you said or something like that. That’s a cheap shot. Our standards are high. Are we not supposed to be high standard? Yes, we are supposed to be high standard. We’ll take on all comers, that type of thing.

But to answer your question maybe more directly, our administration, our coaching staff, our fans, the athletes that we recruit, everybody that works in our department, the whole entire athletic department, are about one thing, and that’s very rare. I don’t know if that’s like that anyplace else in America except maybe Penn State now, and that’s only been recent because of what Sanderson has been able to do. And that is all of those entities expect to win every year, year in and year out, and that’s because of a guy named Dan Gable, who took over from Kurdelmeier and then brought it to maybe unimaginable heights. But not unimaginable for him or his team.

So yeah, we’re spoiled. Yeah, I wrestled for that guy. But don’t use that against us. But yeah, we’ve got to do our job. Is it a double-edged sword? I don’t look at it that way. We’re accountable. We’re accountable to perform. Our guys know it. Our fans expect it. We love it. We love it as coaches. When that day comes where you’re fatigued by those expectations or you’re fatigued by the battle that you wake up every day, take head on, then — this isn’t about a paycheck for any of us. This is about waking up ready to fight every day, every comer, and not in a illegal way, in a wrestling way, in a legal, sportsmanship, Division I collegial atmosphere way.

Q. DeSanto and Young both made big strides last year. What have you seen out of those two to take another step forward?
TOM BRANDS: DeSanto is more like he thinks before there’s reactions. He still has to move up — I think he’s third ranked maybe in one poll I saw. He has to take some steps — you know, there’s a national champion coming back, Seth Gross, so he’s going to have to get better at the bottom. There’s some positions he’s going to have to get better at. But he’s gotten better at maybe stopping to think before he just goes off. The work that he’s done and that self-discipline is definitely better.

Young had two big wins over a guy that won the US Open. A month later that guy won the US Open, and that was a guy that he hadn’t beaten before and lost to in the Midlands Finals. So there’s progress there, and we’re ranked ahead of that guy. So we’ve got to keep making progress because that guy is ranked below us, and he’s hungry. I think we’re No. 2 ranked at that weight maybe, and that Hidlay kid. It’s not maybe about opponents, maybe I’m talking about Seth Gross and Hidlay, it’s about just keep getting better and what you mentioned. These guys are maybe in your eyes taking steps, and we see it, also, but it’s got to show up in that seven-minute match. It’s got to show up when it’s go time. 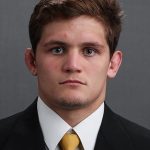 Q. What about Teasdale? Tell us about him and what he can do going forward.
TOM BRANDS: Since he’s transferred, he’s done a great job. He’s a professional in his academics on the mat, in his life. His demons are public. He’s spoken publicly about them, and you know, he’s a young kid that is handling a tough situation very well, and our compliance team has done a great job with the waiver route, and he’s on track, and he will definitely — look forward to seeing him on the mat November 17. I mean, why not. Let’s just put it out there.