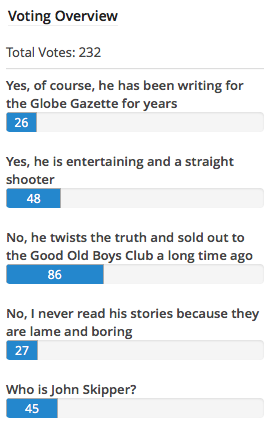 NIT readers voted on this question: Do you trust anything John Skipper writes?

The votes are in, and John Skipper is losing, big time.

Like a punishing left hook to one of his 3 chins, NIT readers have voted overwhelmingly that they either don’t trust what he writes, his stories are “lame and boring” or they have flat out never heard of him before.

“I have to say, the results of this poll are even worse than I thought they’d be,” said NIT Publisher Matt Marquardt.  “I mean, really, the people of North Iowa are smarter than he thinks they are.  His pandering to the likes of Eric Bookmeyer and other personalities who are poisonous to the welfare of the common citizen have come back to haunt him.  What I mostly hear on the street is ‘when is that guy gonna quit for good?'”

John Skipper has been writing for the Globe Gazette since the Paleolithic Age and is a self-proclaimed expert on baseball as well as finding his way around the inside of the mayor’s office.  He is known for taking cheap shots – he  might call them “sucker punches” – at regular Mason City citizens just to score points with his cronies in City Hall and the Courthouse.

“It makes his job easier,” Marquardt explained.  “The more he kisses their pasty white butts, does their bidding, the less work he has to do.  They’ll tell him anything he wants to know as long as he supports whatever messed up agenda they march out next.  Heck, sometimes he goes in the mayor’s office and the door closes behind them and the lights go off.  Now, I don’t know what goes on in there, but since the story is already made-up ahead of time, the 20 minutes they spend in there together could be for just about any reason.  I know those two are quite fond of each other.”

If John Skipper is reading this – which we all know for sure he will, since insiders at the Globe have repeatedly told NIT how he browses this site almost everyday so that he can learn from real pros how to write stories – he should pay close attention to the option that got 86 votes, nearly double any of the others.  It says Skipper has sold himself out to a corrupt system in North Iowa that benefits the few – the socially and politically connected class – at the expense of the masses.  For a writer who tries in vain to portray himself as an “everyman” or somehow a “likable guy”, he is failing miserably, according to this poll.

Mr. Skipper, get up from your desk in the Globe newsroom, walk into the men’s room, look at yourself in the mirror, and ask yourself if the petty wage the Globe pays you is worth carrying on forward as you have.  Perhaps it is time to stop the lies, let go of the mayor’s coattails, and maybe try writing some truth for once in your life.  Look back at your columns from 2009 through this year where you support everything Eric Bookmeyer ever did or you thought he would do.  Now look at him – really examine him.  Do you see the drunk, the bully, the jobless man, and the loser in a discrimination case involving age and race and retaliation?  Do you see the man who created a hostile work environment at city hall?  Do you see the man that is the central figure in so many other rumors that constantly float around town (daycares and maids)?  You support that behavior by supporting the mayor, Mr. Skipper, and now his reputation is rubbing off on you.  You wrote skewed stories to help him get elected – twice – after he spent thousands on ads with you.  Do you feel good about that?  Maybe this poll will serve as a bucket of ice water into your face and wake you up from the half-asleep daze you appear to be in 90% of the time.