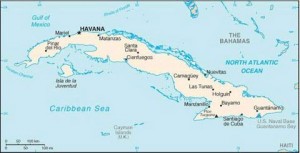 President Obama’s decision to begin normalizing relations with Cuba will advance United States’ interests and those of the Cuban people. The 11 million people of this island nation have waited far too long — over half a century — to fulfill their democratic aspirations and build closer ties with the rest of the world in the 21st century. Our new U.S. policy on Cuba reflects the reality that past policies — although well-intentioned — no longer suit today’s situation. The president’s announcement reflects a historic turning of the page on enmities born of a different era and toward a brighter and more promising future.

Early in his administration, the president took steps to ease restrictions on Cuban-American visits and remittances that opened new pathways for family reunification — and later expanded this to include religious, academic and cultural exchanges for all Americans. Last week’s decision builds boldly on those initial measures and will increase communications, commerce and travel between our two countries. The State Department will lead discussions to restore regular diplomatic relations with Cuba for the first time since 1961 and re-establish an embassy in Havana. In our bilateral discussions, the United States will seek to advance cooperation on issues of mutual interest, including counter-narcotics, migration, combating trafficking-in-persons, the Ebola crisis and shared environmental challenges.

The president has made clear that a critical focus of these actions will include continued strong support for improved human-rights conditions and democratic reforms in Cuba. The promotion of democracy supports universal human rights by empowering civil society and supporting the freedom of individuals to exercise their freedoms of speech and assembly. For these reasons, we welcome Cuba’s decision to release more than 50 political prisoners, expand Internet access for Cuba’s citizens and allow better human-rights monitoring by the International Red Cross and United Nations. Our firm support for progress in these areas will be unwavering, and we will continue to implement programs to promote positive change in Cuba.

As Albert Einstein said long ago, it’s just not rational to continue doing the same thing in the expectation of obtaining a different result. Since U.S.-Cuban relations were frozen, the world has been transformed; the Cold War ended a quarter century ago. Over time the U.S. effort to isolate Cuba began to have the reverse effect of isolating the United States especially in the Western Hemisphere. Meanwhile, Cuban leaders used our stance as a source of propaganda, to justify policies that have no place in the 21st century. It has been an open secret that the relationship has been in a rut that benefits no one on either side. The time has come to cease looking backward and to begin to move forward in the interests of both freedom-loving Cubans and the United States.

What, specifically, has the president decided to do?

First, he has authorized U.S. officials to expand travel, increase remittances and grow bilateral trade. To facilitate this and ensure proper oversight, the Treasury Department will also make banking easier and allow the use of U.S. debit and credit cards in Cuba. In addition, it will strengthen the monitoring and transparency of financial flows between the United States and Cuba by allowing American financial institutions to open correspondent accounts at Cuban banks. One effect of all of the changes will be to increase the ability of Americans to provide business training and other support for Cuba’s nascent private sector, which already includes 500,000 employees. In this regard, the Commerce Department will ease current export limits on a variety of products that would help Cuban small businesses grow such as construction firms, agricultural companies, automobile repair and others.

Second, the president’s decision will support new efforts to tear down the digital wall that isolates Cubans. The country has an Internet penetration rate of 5 percent, among the lowest in the world. Prices are high, and services are limited. Under the new policy, we will permit the sale of technology that will begin to unleash the transformative effects of the Internet on the island.

Third, the president has ordered reforms in the application of U.S. sanctions to Cubans in third countries.

Fourth, the president has asked the State Department to review Cuba’s designation as a state sponsor of terrorism to ensure that any such designation is guided entirely by the facts and law.

All this is in addition to the start of talks aimed at the restoration of normal diplomatic relations. Next month, Assistant Secretary of State Roberta Jacobson will lead the U.S. delegation to the next round of U.S.-Cuba Migration talks, and the Commerce Department will lead a business delegation to the country in the coming months. In the spring, President Obama will travel to Panama for the 2015 Summit of the Americas, where we are encouraging full participation by representatives of Cuban civil society. Meanwhile, the United States has welcomed home USAID subcontractor Alan Gross, who was wrongfully jailed in Cuba for more than five years, and also an American intelligence agent who had been imprisoned for two decades.

President Obama’s announcement last week is forward-looking and emphasizes the value of people-to-people relations, increased commerce, more communications and respectful dialogue. It will enhance our ability to have a positive impact on events inside Cuba and to help improve the lives of the Cuban people. It will put American businesses on a more equal footing. And it will enhance the standing of our own country in the hemisphere and around the world.