Marine veteran will get his runaway dog back, animal officials say 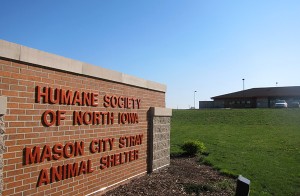 MASON CITY – A marine veteran whose dog ran away and ended up in the local animal shelter but then encountered trouble getting his pet back will be reunited with the pooch, the shelter says.

United States Veteran Jake Fesko’s dog Gunner (a retriever) escaped from Jake’s yard and was impounded by the Mason City Animal Shelter. The operation was closed for four days over the Fourth of July holiday and then initially refused to give Gunner back to Jake.

As word spread of the standoff that followed, including the shelter allegedly asking for hundreds of dollars in fees and procedures for Gunner, a social media outburst followed – many times a common reaction in modern times to touchy subjects – including threats from the public against the Humane Society, which shares a building with the city-owned animal shelter on Birch Drive in Mason City that actually was dealing with Gunner.

Late Tuesday, the Humane Society of North Iowa felt compelled to release a statement on the matter, saying:

It’s been a rough few days for us here at the Humane Society of North Iowa. We do our best to work with pet owners, adopters, volunteers, and animal lovers….all while making sure we adhere to the laws and ordinances we are required to follow as a non-profit animal shelter. Sometimes the results are not always to people’s liking or satisfaction, but no matter what, no one (on either side of ANY issue) deserves these kinds of threats. Ever.

While the end result of this story is that the owner will be reunited with his dog, the lesson to take away from it is that as pet owners, you must know the laws and requirements in your state and community in order to avoid this kind of situation in the first place. In the State of Iowa, dogs over the age of 6 months are required to be vaccinated for rabies. In the City of Mason City, cats and dogs are required to be vaccinated for rabies and also have a current city license. Each community and state may have different laws…but knowing them and adhering to them is a part of responsible pet ownership.

We appreciate everyone’s positive comments and support that you’ve shown us during this very controversial incident and hope that as a community and as animal lovers, we can all move forward with the common goal to help homeless and displaced animals. Thank you.

27 Responses to Marine veteran will get his runaway dog back, animal officials say