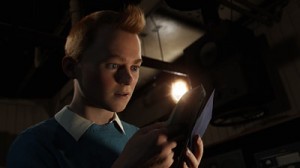 LOS ANGELES — Is there a better way to start a Hollywood friendship than handing someone an Oscar as you shake his hand for the first time? That’s what happened when “The Lord of the Rings: The Return of the King” won the Academy Award for best picture and Steven Spielberg was the presenter as producer-director Peter Jackson came forward to pick up the most coveted trophy in town.

(PHOTO: Tintin (Jamie Bell) in “The Adventures of Tintin,” from Paramount Pictures and Columbia Pictures in association with Hemisphere Media Capital.)

The two filmmaking titans are now collaborators on “The Adventures of Tintin,” a movie that takes Europe’s beloved boy adventurer and introduces him to an American audience through a cutting-edge cinematic creation that, to most observers, pushes the envelope for animation and, for some skeptics, tests the film academy’s definitions of what is and what isn’t animated.

Spielberg and Jackson spoke earlier in the year about the project’s spirit of adventure both on and off the screen.

Q: A fundamental early decision with any project is tone. What can you tell us about the tone of “Tintin”?

Jackson: I read “Tintin” before I could read. When I was 5 or 6 years old, I would just look at the pictures, and then I learned to read and found out more about the characters and the humor and the plot. And then, eventually, as everyone does, I grew older than Tintin, and I looked back at the books again and I saw the social satire and the way he’d send up bureaucrats and send up the police and anybody he saw around him.

He was very much reflecting the time and the place that he grew up in. He was also reflecting popular culture. I can see now that he must have loved Hollywood action films. What I’ve tried to do with my contribution to the film was to lock into the different ways that I loved Tintin both as a child and as an adult. Hopefully the film will work on that level, with all the things young viewers will enjoy but also the humor and satire that an adult will pick up.

Q: What did you see as the key challenge of this project?

Spielberg: The challenge for me was simply to crack the incongruity of a drunken sea captain and a 16- to 18-year-old journalist who winds up being part of the story more than anyone in that profession is ethically allowed to. They are the yin and the yang.

Tintin is this squeaky-clean boy scout, he’s intrepid, he won’t take no for answer, and in a way he’s a cross between Sherlock Holmes and a young Indiana Jones. Our job, really, was to find a story that introduces Tintin to Capt. Haddock for the very first time and initiates a whole series of Tintin movies. We went to a (1941) book called “Tintin: The Crab With the Golden Claws” that first introduced the world to Capt. Archibald Haddock and we started on that page.

Q: Steven, when you were working on the film you said that it made you “feel more like a painter” than at any point in your four-decade career. In what way did you mean that?
Spielberg: I’ve been accustomed through my entire career of getting images to match the things I imagine by going through dozens if not hundreds of people. I found myself on this project — in this particular medium — able to do not just a couple of jobs but to be able to do 15 or 20 jobs. It’s an art form that allows me to have control over lighting. I can underwrite or overwrite a performance and through the animators put (something into a performance) that even the actors didn’t bring to the bay. I’m pretty much able to push the camera — I’ve never been a dolly grip before — I’m able to be a focus-puller. I can have an effect on the hair and makeup.

Jackson: We wanted to create a virtual studio — we haven’t even got a name for it — where Steven would be able to pick up a virtual camera that looks a little like a PlayStation controller with a 6-inch screen and use it to step inside the world of Tintin that we had created. All the locations had to be built in advance of us doing the motion-capture shoot, as it were, so for the best part of two or three years we were building all of the sets, all of the cars, all the airplanes.

Spielberg: I had a chance with this sort of game controller to step into the (performance area) where the actors were working — the computers didn’t detect me because I wasn’t wearing a motion-capture suit, I was invisible to everyone except the actors — and I’d be able to look up and see Andy Serkis and Jamie Bell and then, with a flick of my eye, I could look down at this little 6-inch color screen, and I see Capt. Haddock and Tintin and this entire virtual world. And when I take four or five steps with this controller, that whole world speeds past me as I move down on the street to find angles and make choices about compositions, pick the close-ups and the master shots.

Q: Often we view new layers of technology as making the filmmaking process more complicated or less organic, but the way you describe your approach makes it sound as if, in this case, the technology made it more distilled and even purer on some level.
Spielberg: Technology is merely a tool. The technology that brought dinosaurs to life in “Jurassic Park” was talked about a long time because there had never in the history of film been a leading character that was nonexistent except on a computer. But one minute into “Jurassic Park,” if your movie’s working and if you’re telling your story properly, you can get the audience involved and they forget and don’t even care what medium you’ve chosen to tell the story. To me the medium is not the message; the characters and the narrative are.

Q: Going back to an earlier point in the project, before this tech was an alluring element, why didn’t you approach Tintin as a live-action endeavor?

Spielberg: At first I was thinking of doing a live-action movie, but I could not do Snowy in live-action. There was too much demanded from the dog. So I wanted to do a test to see if a digital dog could be in the same scene as a live-action character, so I went to Peter’s company, Weta, and about two months later I got the results of the test back. I was making “War of the Worlds” at the time, and I went to my trailer and popped in the DVD and saw this photo-realistic digital dog, but then I saw this live-action Capt. Haddock on the screen — and it was Peter Jackson dressed in a Capt. Haddock outfit. Once I saw Peter Jackson as Capt. Haddock, I knew two things: I was going to run away from live action, but I was also going to run toward Peter Jackson.
___
©2011 the Los Angeles Times