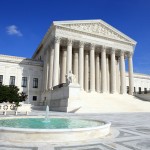 WASHINGTON, May 28 (UPI) — The U.S. Supreme Court ruled 5-4 Tuesday in a Texas case that a defendant may raise an ineffective counsel claim, even if the state framework doesn’t permit it.

Carlos Trevino was convicted of first degree murder in Texas and sentenced to death. Neither the lawyers appointed for his appeal, nor those lawyers involved in his collateral federal appeal, raised the claim that his trial lawyers were ineffective.

After the appeals court acted, however, the U.S. Supreme Court ruled in last year’s Martinez vs. Ryan “that lack of counsel on collateral review might excuse defendant’s state law procedural default.”

The U.S. Supreme Court, in a Tuesday opinion written by Justice Stephen Breyer, but read from the bench in his absence by Justice Anthony Kennedy, reversed the appeals court and said, “Where, as here, a state’s procedural framework, by reason of its design and operation, makes it highly unlikely in a typical case that a defendant will have a meaningful opportunity to raise an ineffective-assistance-of-trial-counsel claim on direct appeal, the exception recognized in Martinez applies.”

The narrow ruling particularly affects Texas, Mississippi and Louisiana, which are governed by the Fifth U.S. Circuit of Appeals.