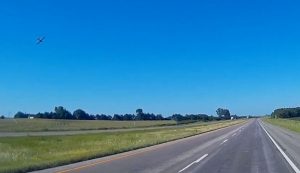 Sac County Sheriff’s Office and the Federal Aviation Administration (FAA) are investigating a fatal plane crash that happened Friday morning July 29, 2016. Raccoon Valley Electric Cooperative crews were responding to a power outage around 9:48 AM in the 2900 mile of Sierra Avenue, about 3.5 miles south of Sac City, when they discovered the wreckage of a crop dusting plane in a corn field.

Although the investigation is ongoing, preliminarily it appears the pilot 44-year old Mark James Watson from Burlington, Iowa clipped the static lines on the high voltage power lines owned by Mid America Energy and the Air-Tracker INCE AT-402 plane crashed in to corn field owned by Steve Hansen of Sac City. The pilot was pronounced dead at the scene.

Watson had recently re-fueled and reloaded with chemicals at the Carroll, Iowa airport. An estimated 160 gallons of fuel and 300 gallons of chemical were onboard at the time of the crash. Region 5 Hazmat from the Fort Dodge Fire Department responded as well as the Sac City Fire Department and Sac County EMS. Watson was sent to the State Medical Examiner’s Office in Ankeny, Iowa for autopsy.

The investigation is on-going.