Pavement marking cost to Mason City taxpayers up 167% since 2009 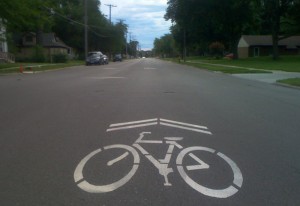 MASON CITY – Taxpayers in Mason City are paying a whopping 167% more for pavement marking since 2009.

City Engineer Mark Rahm explained why the cost is so much higher this year, compared to previous years.  For example, the cost last year was $109,168.70.

“The increase in the current Pavement Marking Program is related to the addition of markings for designation of bicycle lanes, sharrow symbols and cycle tracks over ten given routes throughout Mason City,” Mr. Rahm said.  “The addition to the project was identified in Phase 1 of the Activating Mason City, A Bicycle & Pedestrian Master Plan completed by RDG in 2013. Phase 1 also includes trail and trailhead signage, and the new construction of or improvements to the existing trails.” 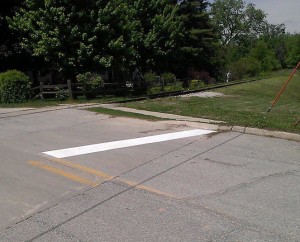 Newly painted RR crossing set, near 1st SE and Hampshire Avenue, a section of track not used in decades.

Some folks are taking notice of the new markings, and some they feel may not be necessary.

“Found a wonderful example of Mason City tax dollars at work this week,” one NIT reader wrote.  “The RR crossing at 1 Street SE and South Hampshire” was given a pavement marking, indicating a rail crossing stop zone.  “Unfortunately, that section of rail hasn’t carried a train since probably the 70’s and has trees growing through the rails. Probably time to change that crossing to “exempt” status and quit wasting paint!”

Pavement marking and painting was a job that was once done by city employees, at a minimal cost. Supplies were bought here in Mason City, a couple of workers did the job during the warm, dry days. Road Use Tax Funds, which typically cover the cost, were minimized for this project and spent elsewhere in upkeep of the roads. Stencils were made by city employees, and they carried a small paint machine around from site to site. In the era of downsizing the number of employees working for the City, the job has been outsourced for a number of years.

Pavement painting costs to City of Mason City since 2009: 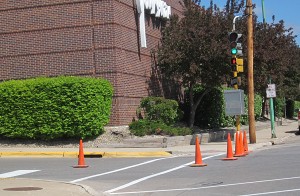