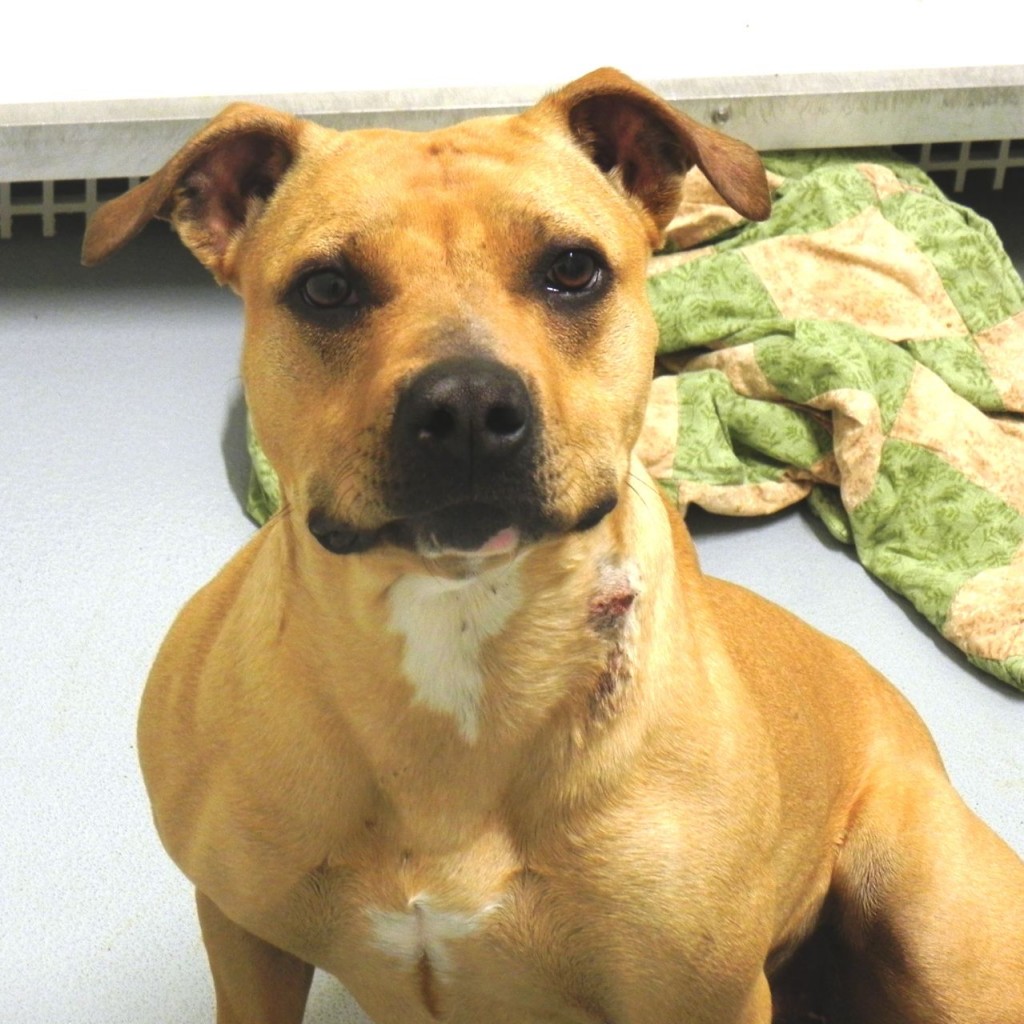 MASON CITY – The Humane Society of North Iowa received a distressing call a few weeks ago from a citizen in Floyd County. She noticed that a home in the area had been recently vacated by the tenants and the pets had been left behind. Four dogs were living outside on the property in subzero temperatures.

The citizen called the Humane Society of North Iowa with the request to take in any of the dogs she could capture. The organization agreed and arrangements were made. The woman went to corral the wandering dogs, but sadly found that 2 had been hit on the road and were dead, another had run away, and the only remaining dog, a small tan pit bull, was badly injured. She loaded the dog, now named “Serenity”, into her car and brought her to the Humane Society of North Iowa in Mason City.

Serenity arrived to the shelter in a very fragile state. She was covered in dried blood, unable to walk on her own, and was yelping and whining when moved into a warm and safe kennel. Every time she tried to get up, her legs failed her and she collapsed to the floor yelping in pain. She was severely dehydrated and her organs were beginning to show the effects from it. Infection was rampant in her body and her temperature was dangerously elevated. The Humane Society of North Iowa needed to act fast if they were going to save Serenity’s life.

After x-rays and a thorough exam by a veterinarian, it was determined that Serenity had been shot. She had a large wound along her side where it is presumed the bullet entered and another under her neck where the bullet left the body. The bullet went right through her shoulder and caused great damage to her muscles and joint. She still had shell fragments inside her. The wounds were infected and causing her an incredible amount of pain.

Serenity was given antibiotics, fluids, and pain relievers to help her. The staff of the Humane Society of North Iowa tended to her every need and hoped she would pull through. A few days later, she showed signs of improvement and the wounds started healing. Serenity was able to walk on her own, though slowly with a limp. Now, 2 weeks later, Serenity has become a staff favorite and is almost completely healed.

“Considering what she’s been through, Serenity has a wonderful disposition and personality,” said Sybil Soukup, Executive Director of the Humane Society of North Iowa. “She also serves as a reminder that pets are not disposable. When you bring a pet into your life, you are responsible for them for the rest of their lives. It isn’t fair to Serenity that her owners moved away and left her behind.”

Serenity is expected to make a full recovery and will be made available for adoption once she is cleared from the veterinarian’s care. Interested homes are encouraged to submit an Adoption Application to the Humane Society of North Iowa through their website or in person.

The Humane Society of North Iowa is a non-profit organization that serves a 9 county area in North Iowa and operates a no-kill rescue animal shelter in Mason City.