This news story was published on March 15, 2014.
Advertise on NIT • Subscribe to NIT

CHARLES CITY – A Charles City man has been arrested and charged with two counts of sexual abuse.

According to Charles City police, on March 11 at about 6:41 PM, officers went to the 700 block of South Grand Avenue and arrested 49-year-old Kenford Simon on two outstanding warrants for sexual abuse in the third degree.

Floyd county prosecutor Normand Klemesrud filed the charges on March 10. The alleged dates of the sexual assaults were listed as April 17, 2013 and May 1, 2013.

A no-contact order was placed by a judge between Simon and the un-named alleged victim.

Sexual abuse in the third degree is a class C felony in Iowa. The act is done by force or against the will of the other person, whether or not the other person is the person’s spouse or is cohabiting with the person. The charge is punishable by up to 10 years imprisonment and a potential fine up to $10,000.

Simon claims via social media to be a married man and bodybuilding coach in New Hampton, Iowa. 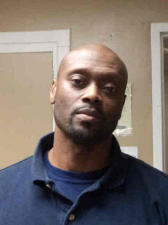