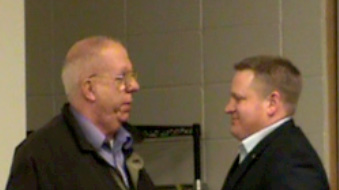 I again read with amusement the hatchet job John Skipper tried to inflict upon me in his rag masquerading as a newspaper.

He called me a snake, a sucker-puncher.  He tried to paint poor little Eric Bookmeyer as a victim.

The truth of the matter is, John Skipper, you are a liar and have been covering for Eric Bookmeyer and this council for years.

The truth is, Eric Bookmeyer approached me three years ago this month – I had never met the man – and told me to give up my business, to quit.  He insulted me and said I had no business being in business.  I had, just a couple weeks prior, launched NorthIowaToday.com, and it had caught fire and was being read.  He knew I was serious about investigating his malfeasance in office, and wanted to bully my doors shut, just as he has done to others in town.

I shook his hand and said I’ll see you at the council meetings.

Now, three years later, the truth about Eric Bookmeyer and several of his council members is out, but John Skipper refuses to write about it.  He has covered it all up.

He wrote earlier that there is no “hostile work environment” created by Eric Bookmeyer at City Hall.  He knows there is, and the complaints have been filed to prove it.  What do you think the Human Rights debacle is?  Just the icing on the cake.

Skipper has never, ever, written about the mayor’s proven behavior in the community of bullying citizens, using profanity in their businesses and causing some to cry.  He has never acknowledged Eric Bookmeyer’s stumble-bum reputation as a drunk.  He simply can’t bring himself to believe any of it could be true, after all, John Skipper vouched for Eric Bookmeyer.  He will never go back on that word; it would prove he was wrong, and even a liar like Mr. Skipper can’t have that kind of shame.

Win or lose this election, I have made my point: John Skipper and Eric Bookmeyer will stop at nothing to protect their relationship; Bookmeyer carries Skipper’s lunch by allowing Skipper to sit in the mayor’s office almost daily, bonding like a long-lost father and son.  Skipper is Bookmeyer’s business agent, only “reporting” what Bookmeyer wants, how he wants it.  It is all cooked up, folks; you are getting a sliver of the truth from Skipper, and most of that is rotten and full of holes.

I could win this election.  I could lose.  I truly believe that there is more to this nasty game than just keeping me out of the meetings.  I believe there are facts, complaints, shenanigans that Bookmeyer and Skipper want kept from me at all costs.  I would upset the apple cart.  The people of Mason City would be awakened.  And the Good Old Boys Club will fight tooth and nail to stop that from happening.

It is a shame that this campaign season is marred by the actions of the incumbents.  I stand ready to debate Janet Solberg, Eric Bookmeyer, whoever, publicly.  Let us stand before the people of Mason City and take their questions.  I’ll stand inside the band shell and take the questions from the audience.  I’m ready and waiting.