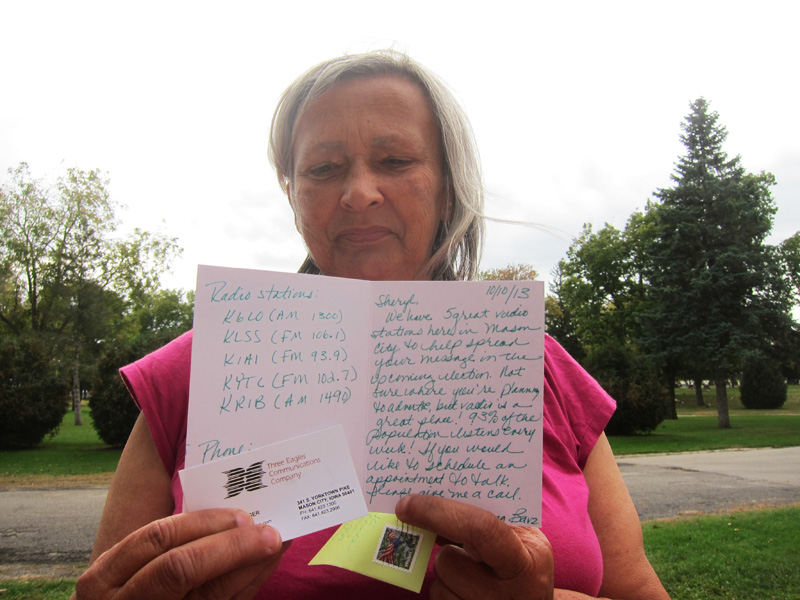 MASON CITY – After a local radio station allowed Mason City Mayor Eric Bookmeyer to go berzerk on its airwaves, and then posted the hate-filled rant to its website, the radio station is now asking challengers to the mayor’s banana republic government to by ads.

“We have five great radio stations,” a hand-written letter from Three Eagles radio management said to Second Ward City Council candidate Sheryl Gerk. “Not sure where you’re planning to advertise, but radio is a great place!”

Mayor Bookmeyer found out how great radio advertising is, using a several minute diatribe on October 2nd on KGLO Radio to name-call a Mason City citizen – Matt Marquardt, who is not running against him for office – and then brazenly and recklessly threw at least two other candidates – Max Weaver and Jodi Draper – under the bus with him. Radio “personality” Bobby Fisher allowed Bookmeyer to speak minute after minute, degrading and name-calling his own fellow citizens, as Fisher helped finish sentences for Eric Bookmeyer and made no attempt to guide the interview back on-topic.

“It was a cowardly move, by a man who has belittled and abused the people of Mason City for over three years,” Mr. Marquardt said later. “Bobby Fisher ought to be ashamed of himself, but we all know how he wants to be Eric’s friend.”

In a deft move, Mayor Bookmeyer alerted a local newspaper reporter to listen to the diatribe so that a story could be published to give the story longer life, just as news hit the media about a complaint filed against himself and his cohorts on the City Council.

Three Eagles later altered the audio it had published to its website, removing all of Bobby Fisher’s words as Mayor Eric Bookmeyer seemed to enter a trance-like state and spewed hate over the airwaves.  Just hours later, after complaints were called into Three Eagles, the audio file was removed from the website.

“John Skipper called me within minutes of the radio show ending,” Mr. Marquardt stated. “I think he wanted to catch me off-guard. He was paraphrasing from the radio show, had his quotes wrong, as far as I could tell. It was bush league at best. I refused to respond at the moment and later emailed my response: A challenge to the mayor and my opponent, Janet Solberg, to face me in a public debate.”

Now, Three Eagles wants advertising dollars from the citizens running against the incumbents.

“I seriously doubt I will pay for it,” Ms. Gerk said.

“I think Delena Barz and Tim Flemming at Three Eagles are good people.  They tried to be somewhat fair to me, to make up for Bobby Fisher’s actions, the mayor’s actions,” Mr. Marquardt said.  “As far as buying ads from them, well, they didn’t ask me yet.”