Sources: Morale of City employees sunk in 2010 when Bookmeyer took office and has never recovered 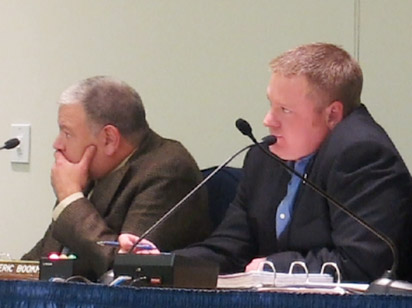 MASON CITY – Email messages and other data provided to NorthIowaToday.com this week provide a glimpse into the state of City Hall in early 2010, and the immediate impact made just a short time after Mayor Eric Bookmeyer and two new council members – Janet Solberg and Travis Hickey – were sworn in to office.

Immediately after taking office in 2010, Mayor Bookmeyer set upon implementing the “Lean” initiative.  Sources told NIT beginning in 2010 that the actions of Mayor Eric Bookmeyer had created, in their words, a “hostile work environment” for city employees. Since 2010, City staff has informed NIT that Bookmeyer had told them it was “his way or the highway” and to “get on board or else.” Employees had come to believe that as part of Bookmeyer’s Lean initiative, their jobs could be on the line.

In response to questions from Globe Gazette reporter John Skipper about a possible problem with staff morale at City Hall, in April of 2010, then-City Council member Jeff Marsters wrote an email response to Mr. Skipper, saying “It’s not a healthy situation with all the staff obviously upset and concerned with what appears to me being a result of city council members as well as the Mayor micro managing city staff. It is also an uncomfortable environment with the new Mayor snooping around city hall most days.”

Skipper was questioning Marsters about what Council member Max Weaver had called a “hostile work environment.”

Skipper wrote to Marsters on April 8th, 2010:
“Max (Weaver) was on the radio today talking about the “hostile work environment” at City Hall and I believe he made reference to the Solberg situation – which sort of forces my hand. I talked to Don Nelson this morning. He said he didn’t know too many details about the Solberg situation but he did talk on the record about the morale at City Hall. He said it’s the worst he’s seen in his 10 years on the council and said it started after the election. He said he wouldn’t call it ‘hostile’ but said there is an ‘apprehensive, nervous atmosphere’ that he thinks is related to all the talk about the Lean Initiative.”

“I want to try to be fair with all of you,” John Skipper claimed.

(NOTE: The “Solberg situation” referred to by John Skipper relates to actions by Janet Solberg against a City Hall employee, immediately after she took office.  The City was forced to spend nearly $2,000.00 on outside legal fees to mediate the situation.  NIT will report on that in greater detail soon.)

Mr. Skipper then pursued information from then-City Attorney Tom Meyer about the hostile work environment comment Mr. Weaver had made to Skipper. On April 9th, 2010, John Skipper contacted Tom Meyer in an email, writing “Tom – As you know, Max talked to me about what was discussed in an executive session. I need to know if that is a violation of the law.”

Meyer responded, saying “The City Attorney does not have a role after an alleged violation.  Enforcement would not fall under my jurisdiction.”

Later, in June of 2010, Skipper again contacted Tom Meyer, this time asking “Is it possible to impeach a … council member?”

Meanwhile, soon after being sworn into office, Mayor Eric Bookmeyer had at least two formal complaints filed against him by high ranking City Hall employees.

In February of 2010, just a month after Bookmeyer was sworn in as Mayor, one employee filed what amounted to a “hostile work environment” complaint against Bookmeyer, which a source told NIT “no one knew how to handle. No one wanted to meet about it and they hoped it would just go away.”  This employee has since moved on to another job.

Not long after, another employee filed a similar complaint, and described it in late 2010 in person to NIT Publisher Matt Marquardt. The employee informed that Mayor Bookmeyer was regularly appearing in the employee’s office and in essence, demanding that the employee follow all of the mayor’s directives and policies or face consequences.  The employee also informed Marquardt that a “binder” of information was now being kept by a number of employees, logging every interaction with the Mayor.  “And I’m not the only one,” the employee stated.

NIT also was given word that yet another -possibly informal- complaint was filed against Bookmeyer by a third employee regarding alleged “inappropriate comments” he had made about the employee.  NIT will attempt to gain further documentation of this incident.

City Council member Scott Tornquist had said publicly that 2010 was the worst year he had experienced as a council member.

Fast forward a year later to early 2011. Don Nelson was completing his last term as a City Council member. In a letter to NIT, Mr. Nelson stated that morale at City Hall remained “at an all time low.”  Mr. Nelson stated that he had observed in the 14 months since Mayor Eric Bookmeyer had taken office, the “lowest morale of City Staff in 20+ years, similar quote from City Staff members.”  He indicated that Bookmeyer had enacted a policy whereby City Staff “needs to submit a report to the City Administrator every time they talk to a council member and what they discussed.”

City employees continued to report to NIT off the record that morale of City employees remained low.  In 2012 as Mayor Bookmeyer and the City Council moved against the City’s Sanitation Department, numerous reports were fielded about the paranoia and apprehension by the roughly one dozen employees there.  That situation last for months.

As recently as last week at the National Night Out event in East Park, a now-retired City Hall employee of 19 years told NIT Publisher Matt Marquardt that morale at City Hall is “as bad as ever.” The former employee elaborated when pressed as to the cause of the low morale, saying “only one thing changed” in the last four years.