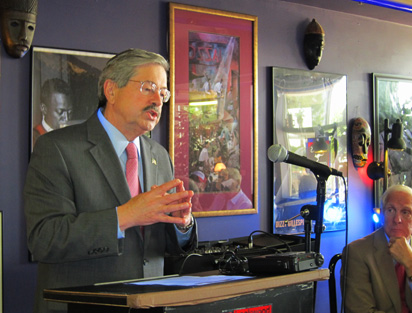 Iowa voters like Gov. Terry Branstad: they give him a 50 – 37 percent favorability rating and a 51 – 33 percent job approval, but they say 46 – 43 percent he does not deserve another term, according to a Quinnipiac University poll released today.

Asked another way, 54 percent of voters say Gov. Branstad has been in office long enough, while 37 percent say he should seek another term, the independent Quinnipiac (KWIN- uh-pe-ack) University poll finds.

Working to Branstad’s advantage should he seek another term is that the field of potential challengers is composed of unknowns about whom four out of five voters don’t know enough to have an opinion.

“Iowans have a nuanced opinion about their off and on-again governor, who has spent a total of 19 years in office. But by the barest of majorities – 50 percent – they like Gov. Terry Branstad and think he does a good job, but at the same they time think he has been in office long enough,” said Peter Brown, assistant director of the Quinnipiac University Polling Institute. “The question, should the governor seek another term, is whether their support for Branstad will in the end supersede voters’ view that it’s time for him to go.”

Branstad’s 51 – 33 percent approval includes the expected partisan splits but almost no gender gap. His score compares to a 49 – 31 percent rating in Quinnipiac University’s May 23 survey.

“Clearly there are some Republicans that like Gov. Branstad and think he has done a good job who also think he has been in power too long, but most of them are probably going to vote for him in the 2014 election should he be matched up against a Democrat,” Brown said.

Although by 26 – 14 percent voters say Branstad’s length of time in office makes them less likely rather than more like to vote for him, 58 percent say it does not matter to their vote.

The three Democrats who are potential 2014 candidates for governor all face substantial efforts to introduce themselves to Iowa voters. The number of voters who don’t know enough to form an opinion of Jack Hatch, Tyler Olson or Mike Gronstal ranges from 77 percent to 92 percent.

“Not being well-known is a problem for candidates because in addition to having to sell their policy agenda they need to introduce themselves to the voters and that will require lots of money,” said Brown.