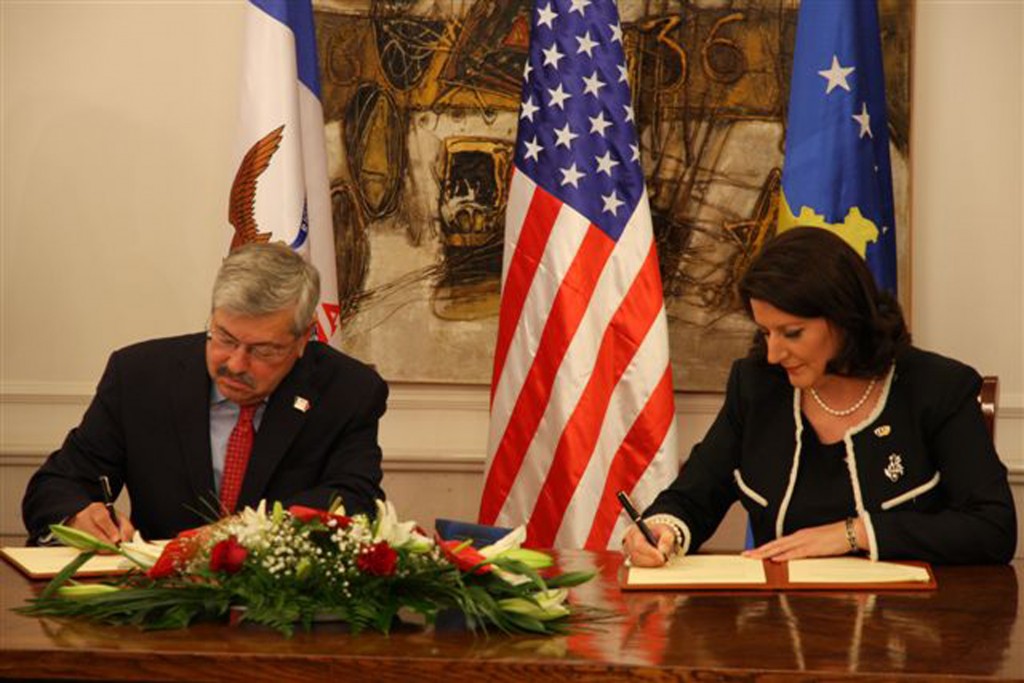 “I am excited to be here and we are very proud to have Kosovo as our newest sister state,” Branstad said. “This is a very young country. It’s a country that I think has a lot of potential.”
Although the agreement was officially signed Sunday, Iowa and Kosovo have had an ongoing relationship for several years.

Since 2003 more than 700 Iowa National Guard soldiers have deployed to Kosovo as a part of the NATO-led Kosovo Forces mission to support the development of a stable, democratic, multiethnic and peaceful Kosovo.

That relationship progressed even further with the State Partnership Program between the Iowa National Guard and the Kosovo Security Forces.

“Our partnership started in March 2011 thanks to the U.S. European Command and the National Guard Bureau that selected Iowa out of 18 states to be the partner for the Kosovo Security Forces,” said U.S. Army Maj. Gen. Tim Orr, the Adjutant General for Iowa.

Orr said the Iowa National Guard has participated in more than 50 engagements with the KSF since the start of the partnership program and were recently able to establish two permanent positions in the U.S. Embassy in Kosovo.

Though the Iowa-Kosovo partnership started with the National Guard, it has since expanded beyond a military focus.
Paula Dierenfeld, the mayor of Johnston, Iowa, credits Orr for helping to expand the state partnership program.

“Rather than just limit that partnership to the military, General Orr had the vision to expand it beyond the military to other areas in the state,” said Dierenfeld. “He [Orr] started talking to me about having Johnston enter into a sister city relationship with a city in Kosovo. Camp Dodge is in Johnston, so it seemed to be a natural extension of the military relationship to go to the community where Camp Dodge is located.”

Dierenfeld was able to formally sign a sister city agreement between Johnston, Iowa and Peje, Kosovo as a part of Governor Branstad’s and several Iowa Sister State representatives recent visit to Kosovo to meet with different government and community officials and business owners.

The delegation spent several days learning more about the agriculture development in Kosovo, who is getting involved, the kind of products they produce, how they are processing and possible future opportunities for trade.

Dierenfeld explained that what they found during their visit is that their communities are very similar, with both economies being based on agriculture and both see the education of the youth as a priority.

“[The Iowa-Kosovo relationship] is going to be very busy because what I think we are going to see is a lot of delegations going back and forth, having conversations, identifying projects that we can work on together,” Dierenfeld said. “This is going to be a long lasting relationship. We’re going to be sisters with Kosovo for the rest of our lives, so we have time. We understand that they want to develop as quickly as possible, but even in the five years they’ve been a free and independent state, they’ve made some great progress.”

Local Kosovar business owner, Armend Malazogu, met with the delegation to show his fruit juice production and discuss his operations. Malazogu said the partnership with Iowa opens new opportunities for him and his family.

“For us it means we can benefit from having the technical expertise and the knowhow on cultivating berries and different fruits with the most modern technologies,” Malazogu said. “It also might mean we expand our market to the United States.”

From military cooperation to agricultural development, Branstad believes the sister state partnership has opened many doors for progress for both Iowa and Kosovo.

“There are just a lot of opportunities in many fields and because of the sister-state relationship, we have a whole army of volunteers back in Iowa that will support and encourage more participation from different individuals,” Branstad said.

Orr agreed with Branstad and said the programs and partnerships continue to expand on a daily basis.

“My vision has always been ‘a whole of Iowa, a whole of Kosovo’ approach,” Orr said. “Twenty years from now, [we’ll] look back and see that we’ve engaged the entire country and we’ve bettered not only Iowa and Kosovo, but we’ve bettered each other [individually]. It’s really all about friendship, and through that strength of friendship, it’s really been a foundation of what I think is a great future that I look forward to watching prosper.”

Branstad said they see the people of Kosovo very much like the people in Iowa, very outgoing and friendly.

“Our visit has way exceeded our expectations,” Branstad said. “We have been so impressed with the people, but also with the progress that’s occurred in a very short period of time and we understand that they are very anxious to build on that relationship for the future. We want the state of Iowa to play an internal role in helping make that happen.”