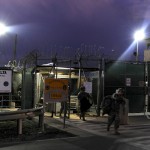 The annual cost of the detention center at the naval base in Cuba is $150 million, CNN reported. That makes it far more expensive than the typical federal prison, where spending is about $25,000 a year per inmate, a figure that rises to $60,000 for the almost 500 inmates at the federal “supermax” prison in Florence, Colo.

More than half of the Guantanamo inmates are currently on hunger strike. There are also questions about the facility’s future, since many of the inmates are on a list of those a presidential task force recommended in 2009 to be transferred to their home countries.

But the military is planning to spend millions of dollars for renovations at Guantanamo. Marine Corps Gen. John Kelly said the tab could run to $170 million because Guantanamo was created hastily in response to the Sept. 11, 2001, terrorist attacks.