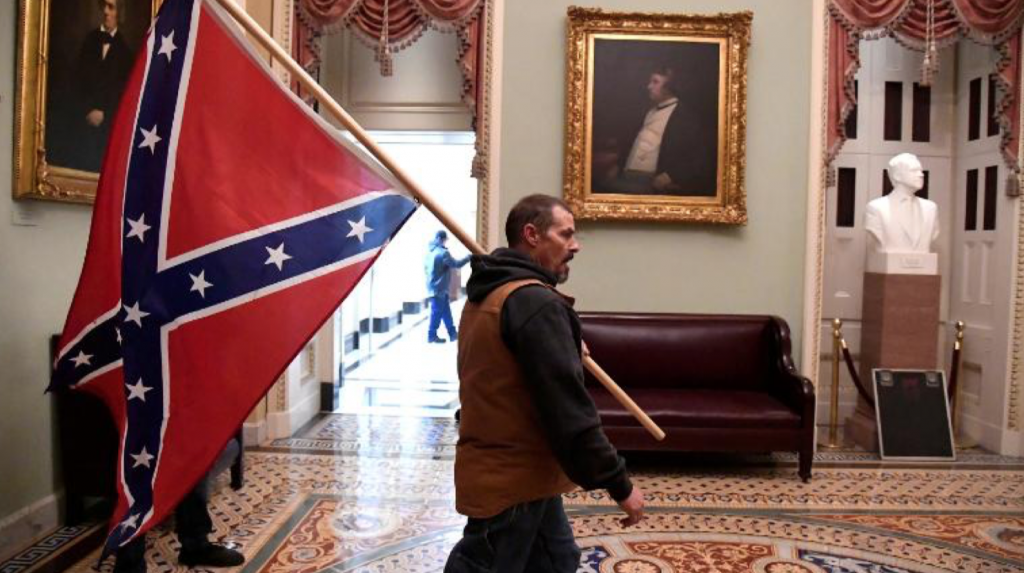 Kevin Seefried with his Confederate flag
photo via justice.gov

WASHINGTON, D.C. – Kevin Seefried and Hunter Seefried were charged today in federal court in the District of Columbia in connection with the riots at the U.S. Capitol on Wednesday, Jan. 6, 2021.

Kevin Seefried and Hunter Seefried each were charged by complaint with one count of knowingly entering or remaining in any restricted building or grounds without lawful authority, one count of violent entry and disorderly conduct on Capitol grounds, and one count of depredation of government property.  Both defendants were taken into custody in Delaware today.  It is alleged that during the events at the U.S. Capitol, Kevin Seefried and Hunter Seefried entered the Senate Building through a broken window and, shortly thereafter, Kevin Seefried was photographed holding a Confederate Battle flag inside the Capitol Building.

On January 12, 2021, both Kevin Seefried and Hunter Seefried participated in voluntary and separate interviews with the FBI. Both defendants confirmed their participation in the events at the Capitol as discussed herein. Kevin Seefried also explained that he brought the Confederate Battle flag seen in Exhibit A to the District of Columbia from his home in Delaware where it is usually displayed outside. Defendant Kevin Seefried told law enforcement that he had traveled with his family from Delaware to the District of Columbia to hear President Trump speak and that he and Hunter Seefried participated in a march from the White House to the Capitol led by an individual with a bull horn.

The ATF and FBI continue to urge the public to report suspected use of explosive devices, or violent, destructive acts associated with the recent unrest. Anyone with information can call 1-888-ATF-TIPS (1-888-283-8477), email ATFTips@atf.gov or submit information anonymously via ReportIt.com.

The FBI is looking for individuals who may have incited or promoted violence of any kind. Anyone with digital material or tips can call 1-800-CALL-FBI (800-225-5324) or submit images or videos at fbi.gov/USCapitol.