This news story was published on May 7, 2013.
Advertise on NIT • Subscribe to NIT 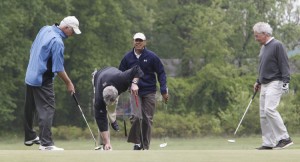 JOINT BASE ANDREWS, Md., May 6 (UPI) — President Obama practiced golf cart, not shuttle, diplomacy as he and three U.S. senators played a bipartisan round of golf at Joint Base Andrews in Maryland.

Obama, who has been meeting with congressional Republicans and Democrats in less formal settings, played with Republican Sens. Bob Corker of Tennessee and Saxby Chambliss of Georgia and Democrat Mark Udall of Colorado Monday under overcast skies.

As it turned out, the Republicans got the upper hand when it came to golfing, at least, thanks to a hole-in-one by Chambliss, a White House official said.

“This afternoon, the president, who has the highest handicap of the foursome, paired with up Senator Udall, who has the lowest,” the official said in a statement. “Senators Chambliss and Corker, aided by Chambliss’ hole-in-one on the 11th, won the match.

“The president enjoyed the chance to spend some time on the golf course with the senators. Most of the talk centered on the round of golf and not the latest round of legislative negotiations in Congress. The president was pleased that the rain held off, despite the damp forecast.”

Obama is looking to buttress support for a bipartisan immigration reform bill that undergoes markup this week in the Senate Judiciary Committee and is seeking common ground on the budget, among other issues.

White House spokesman Jay Carney said the golf outing was “in keeping with his engagement with lawmakers of both parties, and in particular Republican senators, to see if he can find some common ground on some of the challenges that confront us.”

All three senators are members of either the Senate Foreign Relations or Intelligence committees.

Asked if Obama believed golf was conducive to such weighty discussions, Carney said, “Well, he’s willing to try anything.”