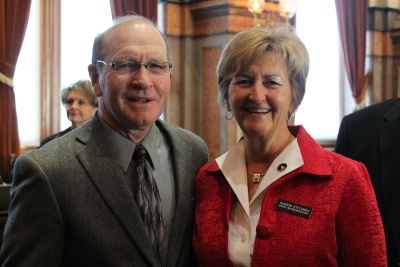 I was very proud to be present in the Senate Chamber when our own Senator Amanda Ragan was awarded the Herbert Hoover 2013 prize which is awarded to a legislator who has shown uncommon dedication and service to Iowans. Applause, Applause!

We debated until 9 p.m. Wednesday on the Education, Transportation and Administration budget bills. While they certainly were not what I had hoped they would be, there will be the Senate versions to consider and some will end up in conference committees where differences will have to be worked out.

I have co-sponsored a bill, along with Rep. Chris Hall and others, that would cap residential property taxes for those individuals who are 65 and older and whose household income is $30,000 or less. I am hopeful that it will go to Ways and Means or Local Government and be acted upon this session. If not, we can bring it back next year.

Several tax credit and property tax bills are being discussed in both Houses. We have got to work together to find consensus on plans that are sustainable and that help Iowa businesses without simply shifting the burden to homeowners and farmers.

Again, this week has been spent mostly in caucus where we discuss each bill that we anticipate will come to the floor for debate; create amendments that we feel will improve the bill; and then, we all come together in the House Chamber to discuss and vote on each bill. That pretty well describes how we will be spending the next six weeks.

An interesting poll has been released by CNN that shows that America’s young people just aren’t buying cars like they used to. While the economy may be partially to blame, other factors could be the result of social shifts. More people have access to and depend upon public transportation – a shift that we need to address in Iowa according to supporters of passenger rail who visited the Capitol on Wednesday. Another reason is the explosion of social media. The youngest, most digitally-connected members of Generation Y (46%) would choose Internet access over owning a car.

Please note: I would like to call your attention to the link below where you can find information about the Made in Iowa bill which I co-sponsored.

Remember to contact me at sharon.steckman@legis.iowa.gov with your input on issues of concern to you and to all Iowans.