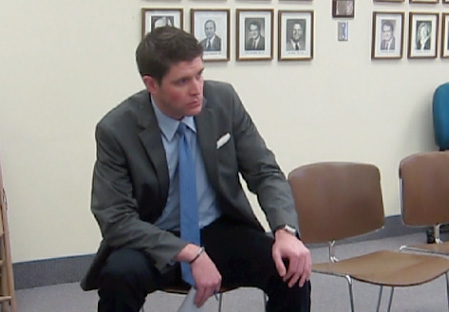 At Thursday’s city council work session, the council continued to bungle its way through this budget process as a dis-engaged public sat idly by with no input.

As a knee-jerk reaction to the carnage, and seemingly in a ham-handed attempt to repair the damage his reputation will suffer for helping along the eventual crippling of Mason City’s Human Rights agency, Council member Alex Kuhn blurted out the idea that the council should cut its own pay by one-third.

Apparently, Kuhn thinks that by cutting his pay he looks like he is making a sacrifice.

What he has actually done is further damage the link between City Hall and the public.

I have already written that public apathy toward City Hall is staggering. Mayor Eric Bookmeyer has dumbed down council meetings to where you need a five-hour energy drink just to stay awake. Most of the work is done before the meetings, most votes are 6-0, and regular folks have been mocked for speaking at the public forums. We have seen anger-prone Scott Tornquist get up and leave a meeting rather than face scrutiny. This mayor and council have made it plain and clear that we are here to serve them, not the other way around.

I have reported that only about 27% of eligible voters turned out in the last two city elections. This could be attributed to a lack of good candidates. Less than 27 people have filed to run for mayor or council since 2007.

Now, with Kuhn’s idea of cutting council pay – and the rest of the council on board – serving on the council will look even less attractive to normal folks who might want to get involved in city government.

I will be the first to say that serving one’s community should not be about getting paid or enriching oneself, but the public disconnect with City Hall is so bad here in Mason City that we have to make it as attractive as reasonably possible.

In reality, the council should have taken a 1.5% raise the same as the non-bargaining employees are taking. And it should get it every year.

As Kuhn stated, Mason City is on solid financial ground. City Hall might be a mess, but Finance Director Kevin Jacobson has served as the bedrock in keeping the city in good shape.  There was no good reason to propose the pay cut except to try and repair a reputation.

The council needs to scrap this idea of a $2,500 per year pay cut for council members so that it does not damage future interest in the positions.

Interestingly, three council seats are up for election this year, and those positions just got less attractive for potential challengers to the incumbents, should they decide to run.

In my opinion, there will be even fewer future council candidates if council pay is lowered this drastically.

I also believe that a common trait with candidates will be that they will have a vested financial interest in controlling what happens at City Hall beyond serving the best interests of the public.  For example, Jean Marinos opposed the Anchor Housing development on Mason City’s west side, clearly a development Mason City needs.  But rather than support the project, Marinos and her husband bashed it because they are landlords and don’t want the competition from more housing units.  Marinos is not on the council for the $7,400 pay per year.  She is there to control City Hall perhaps at times so she can benefit.  Marinos has further admitted that she will solve no problems for her constituents, but instead hand everything to city staff.  She had the audacity to campaign on this platform.

Mason City needs fewer people like Marinos on the council and more people from its foundation: Hard working folks who just want to serve and better the community, people who generally want to serve their neighbors.  Our current mayor and (most of the) council do not fit this description.

By the way, Mayor Eric Bookmeyer quickly changed the subject when Finance Director Kevin Jacobson asked Bookmeyer how much of a pay cut the mayor was going to take.