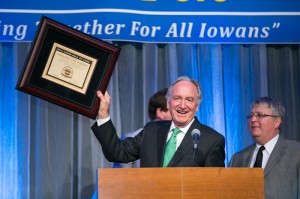 DES MOINES – On Saturday, May 3, over 500 unionist, friends and family gathered at Veterans Auditorium to honor retiring Senator Tom Harkin, and to make him an honorary member of the Iowa Labor Hall of Fame.

This year, the IFL has inducted Senator Tom Harkin, as an honorary member, at this special event.

“We are pleased to induct Senator Tom Harkin into the Iowa Labor Hall of Fame,” said IFL president Ken Sagar, “He has dedicated his life to improving the lives of working men and women not only in Iowa, but throughout the country. This honorary induction is the first time in the history of the Labor Hall of Fame that any individual from outside of a labor organization has ever been selected to receive this prestigious award.”

The people in attendance at this event paid tribute to the Senator for his years of support to the labor movement and working people everywhere.

In a special presentation, President Ed Hill of the International Brotherhood of Electrical Workers presented Senator Harking with an honorary union card from the IBEW for all he has done for workers not just in Iowa, but across the nation.